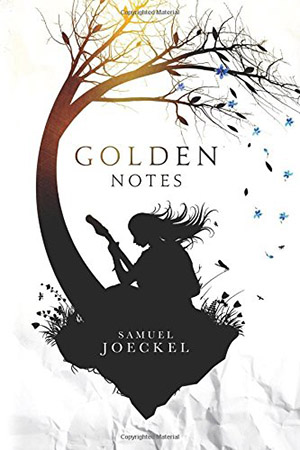 This is the infancy of a dream – the naive and innocent desire which many artists and musicians fostered before fame. Names change once a person hits it big. Cher can get away with being Cher. Led Zeppelin is not a blimp, they’re a band. The Beatles are one of the most famous bands in music history. In Golden Notes, 14-year-old Cali Sky Braithwaite rests on this consideration as she thinks of band names – Joy Division, Creedance Clearwater Revival, the Beatles. She stares down at the name of her own band “Nowhere” and wonders if one day it could also be an afterthought – if the music is strong enough, if her band name could be a stroke of genius and not thought twice about. It’s 1980. Cali Sky is a child prodigy of music, and a daughter of parents who were hippies. She expertly composes covers, and has been playing guitar since she was 8 when she found an acoustic guitar left behind in the family’s new home. When her friend Brodie, a less gifted but still serviceable musician has her join a band with two other friends, she takes the step from a childhood dream and the next step towards being Patti Smith, Siouxie and The Banshees, or even The Raincoats. In a moment, she believes, “Nowhere” could mean something.

I’m in a band, she says to herself, using it as rebuke in her head when her grandfather catches her hearing U2’s “A Day Without Me.” It’s a an adolescent defiance – Cali Sky is still very much a child when she is 14, in 1980, and starting to discover bands for the first time. She finds her father’s record collection hidden in the attic – The Rolling Stones, Pink Floyd, Creedance Clearwater Revival. Cali’s father is an overtly religious man is shy about sharing his past with his teenage daughter. His hippie days are long gone, and we get a feeling from Philip Braithwaite he knows better than anyone the dark side of rock n roll. He is cautious and when Cali tells him he’s going to write a song about darkness destroying everything he urges her not to, and she as she fires back “well write your own song then,” he replies with tears in his eyes, “Please don’t, it would break my heart.”

It makes for a well written balance in Golden Notes. Everything seems to be just lingering on the pre-moment, a time before darkness, with adolescence and the start of Cali discovering music, 80’s new wave, and a growing family. There was punk, but Golden Notes is written in a time just before grunge would hit. It adds a lot of thought to the events. Cali is a teenager in this time, the events only go up to 1987. By 1991 she will be in her twenties and fully in the grunge scene. The darkness in Golden Notes comes in many forms, but all of it is on the horizon, and nicely done by author Samuel Joeckel. He’s written a very strong homage to the 80s music scene, and to music in general, referencing obscure music and songs that only one who lived in the time would remember and appreciate, (U2, The Stranglers, The Raincoats, The Slits, Kate Bush). One gets the feeling he has lived this in time, as he writes about it with pure nostalgia.

The full rebellion starts with a lot of innocence and nice framing by Joeckel. Cali comes from a nice family with nice things, goes to church, and has family outings. She plays the organ at church and reads bed-time stories to her baby sister. As the book progresses her teenage side slowly comes out. When driving with her mother Joan, she says she hates her grandpa after he speaks his mind too freely. “No…” she says, “I really hate him.” But perhaps the biggest feeling and most interesting is the natural connection and love she develops with the photographer Zoe. Zoe takes pictures of Cali during gigs and the two form a natural bond over female bands. When Cali is kicked out of her current band (she takes over after a gig breaks down and outshines everyone by performing “Bad Moon Rising” on acoustic in a strictly punk venue). The crowd loves it; however her band-mates, despite Brodie’s pleading, kick her out of the band. Cali seeks Zoe for advice:

Cali Sky doesn’t know this yet. She’s still unsure if this is true. Much like band names sounding strange the first time, so does fame and being a presence to her. There’s an underlying nature to Golden Notes. As a self-published title it runs into some stigmas – many self-published titles simply don’t get the recognition they deserve but Golden Notes is strong enough to be a published by a major company. One may walk into self-published titles thinking them already inferior but Golden Notes is a strong title. It’s not completely groundbreaking, but I can’t hold it to too many faults – I would say it plays it safe, but then it turns and does something not only daring, but also narratively sound. I wanted to continue reading this book after each page, and that in its simplest form is the best compliment a writer may receive. For its purpose, it works extremely well. The book moves and is very readable. Samuel Joeckel writes a strong book on not just adolescence and 80s music, but also family structure and the bounds of love.

The darkness in Golden Notes is underlying, but when it hits, it not only is narratively sound, but moving. The plot twists hit hard – they are somewhat typical of early adolescent Americana, you may even guess them, but that does not make them any less effective. Samuel Joeckel presents his twists so well, with a grounding from such a healthy family (The Braithwaites have their issues but are their core loving) that they’re not just harsh but all too realistic. Philip is a deeply religious man, he loves his family, and he gets upset when the lord’s name is taken in vain. What happens to him and the Braithwaite family is something all readers will find relatable. Golden Notes is an above average debut, and one worthy of major publication. Joeckel knows his story well, and deserves the acclaim of a major publication. Golden Notes is direct proof of his ability as a writer and story-teller.