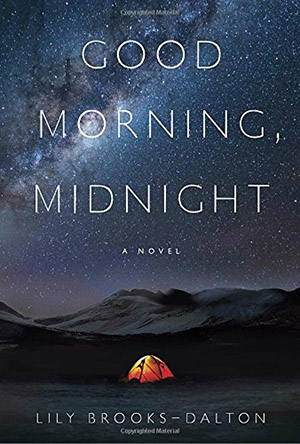 Good Morning, Midnight follows two protagonists faced with sudden radio silence, one stranded at an isolated research facility in the Arctic and one on a ship returning from Jupiter’s moons, the farthest a space mission carrying humans has ever gone. The silence is global, and the worst must be assumed. As each character comes to terms with what’s likely to have happened and what that means going forward, their reflections reveal their intertwining stories.

This is a novel that takes its time and quietly builds its power. The beginning feels a little passive, sometimes frustratingly so, but the payoff for the eventual symphony of emotions and revelations is well worth it. Even as regret and loneliness hold center stage, the inevitability and beauty throughout keep the novel from veering too far into gloomy territory. The characters’ reflections do get a bit expositional at times, but they ultimately enrich and give life to the story.

The science-fiction aspects are kept fairly light. Space travel has advanced significantly, enough to comfortably carry a crew to Jupiter and back in two years’ time, but it’s otherwise not a significant focus of the book. Think of this as a literary novel with some science fiction and apocalypse on the side. A few of the themes explored include parental failure, ambition, and regret as well as a failure to regret the things that couldn’t have been helped. Self-imposed isolation and desire for connection are juxtaposed throughout. It’s a thoughtful novel with flawed, complex characters leading the show. There is one major point that borders on feeling a little too coincidental, but all things considered, it’s feasible enough and arguably necessary; any alternative would’ve likely been to the story’s detriment.

In short, this is a good book for those interested in a quiet, reflective exploration of the internal fallout from an unseen apocalypse. You won’t find hordes of zombies or dystopian societies or scenes of post-apocalyptic combat, but for the reader who’s wondered about the emotional weight of the end of the world, with only the tiniest rays of hope to be found, this is a solid choice.