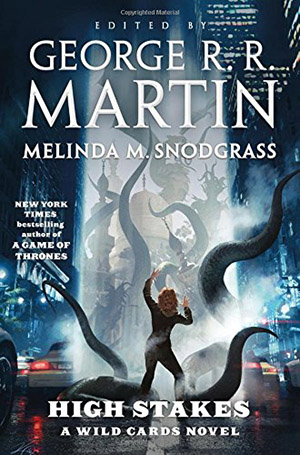 George RR Martin is at the height of fantasy authors. And perhaps of all authors in general. His work in progress, The Winds Of Winter, the seventh installment in his highly anticipated series will without question be a bestseller. In the meantime he has put aside all writing projects to finish it, but before then he had also spent a great deal of time editing his side project, The Wild Cards Series. He is not a contributing writer, that belongs to David Anthony Durham, Stephen Leigh, John Jos. Miller, Melinda M Snodgrass, Caroline Spector, and Ian Tregillis but his workmanship is in the pages, and perhaps more importantly his name is attached to it and thus with it, the reputation of quality.

High Stakes is the 22nd entry in the Wild Cards series. To give a brief intro to things (as it goes back 30 years to 1987, and since then has had over thirty authors), it’s set in an alternate world – post World War II – where a virus rewrites human DNA into that of Jokers – horribly deformed beings – and Aces who have superhuman ability. The fun of it is determining who is an Ace and who is a Joker as often the seemingly chance writing of the characters DNA creates some whose powers are ambiguous. Some have deformities that give them hidden powers, and whose detriments can have the opposite.

It’s a larger overarching world that creates Wild Cards. It’s such a large expanded universe that going into a series in the novel isn’t easy. But it is worth it. It makes sense to start with the first book that was published by Tor, where the series began a new cycle with Inside Flush in 2008. If one feels inclined they could go back to earlier entries to really get a perspective on the series, although they do get harder to find the further back into the series you go (some entries it seems have virtually vanished from publication). Inside Flush is the first entry since Tor renewed it’s publication in 2008 and is an easy intro into the series. Since then they’ve released five entries with High Stakes being the sixth and immediately picks up right after the events of the previous entry Lowball.

Aces are deformed beings, while Jokers are heroes. They have powers like seeing through walls, and disrupting communication – but then there’s characters like Franics Black or Franny a New York City police officer who is classified as a “norm” (unaffected by the wildcards virus) who also play a large part. He is determined to find justice among the world of aces and jokers, although his situation leads to difficult ground. The main plot of High Stakes revolves around Baba Yaga, a russian mobster who forces jokers into an illegal fighting ring, and forces them to battle to the death. Events are split up into five days – Monday through Sunday – where with each day the stakes of these battles increase. We get viewpoints from long time characters like Mollie “Tesseract” Steunenberg who can create portals between worlds – we see a great scene where she robs a casino in five minutes flat by transporting slot machines and cash to her farm miles away – but Mollie is also integral in helping Baba Yaga as she helps kidnap Jokers and brings them to fight in the underground ring.

Viewpoints also come from The Angel, an Ace who first appeared back in 2006 with Death Draws Five. Her origin is a brutal one as her deeply religious mother causes her ability to heal to be drawn – it’s a pivotal scene retold here in High Stakes, and one that carries over through the novel. Powers get even more interesting than some normal and atypical superhero ones, for instance Michelle Pond or The Amazing Bubbles who can absorb energy, store it as fat and then release back as bubbles that can as hard and fast as bullets. Viewpoints continue with the characters of Babel and Morgan. Wild Cards itself has dozens of characters. Each of them with full backstories, making going into the series both intimidating but also interesting as they all seem to evoke curiosity in readers about their lives.

Martin himself has done a strong job of editing together a novel that consists of seven different writers, ( David Anthony Durham, Stephen Leigh, John Jos. Miller, Melinda M Snodgrass, Caroline Spector, Ian Tregillis) and back-story of 22 books over thirty years. Melinda Snodgrass also deserves credit for editing duties as well. High Stakes isn’t bad. It’s fun, high energy, and deep. But it is also difficult to follow if one is not acquainted with the series. Consider the points of views of the characters that can be introduced and on a whim and moved about as a side note. For new readers in the series, it can take some research to really begin to follow everything. There also factions and groups under different names, as well as viewpoints that shift time and point of view. In a moment the series could be New York, the next in Kyrgyzstan. It’s not always clear where a scene is exactly and who is talking to who about what. These are crucial points, but if one is willing to look deeper into Wilds Cards one may have to start a few steps back, and take the time to read up on the series.

High Stakes and Wild Cards in general could due with some more human qualities and a bit more grounding. After all, we are working with superheroes, but to make superheroes even possible – or in any case extraordinary – we also need a dose of the ordinary, and with that ordinary human beings. There don’t seem to be many of them in High Stakes other than characters like Franny. No one looks at our characters in awe or confusion and or admiration. Scene after scene we have Jokers fighting Aces. But, despite the strength of writing, the drama, and the action, as superhero novel it’s strong but lacking some human touches. Those who are fans of George RR Martin will appreciate it as he has done a fine job editing a difficulty project, and long times fans of the series will be pleased. It’s a series that’s worth getting into, but High Stakes is a difficult entry begin with.