Marked For Life by Emeli Schepp 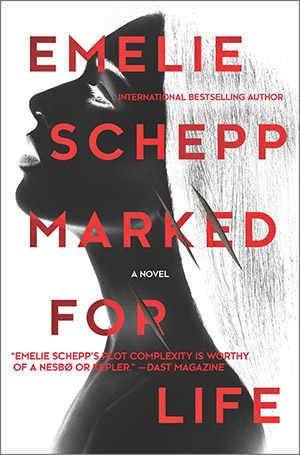 Kerstin opens the door to her yellow house where in the living room she discovers her husband laying on his back on the floor. He’s dead and his chest is stained in blood. The race to solve the crime begins and the police are closely followed and monitored by the prosecutor. The crime is set in Sweden in the middle of winter. Very rapidly, evidence is uncovered that is difficult to explain. The background investigation into Kerstin and her husband doesn’t clear anything up either. Then a second murder occurs and appears to have convoluted and complicated ties to the first. Despite the growing complexity the linking elements are slowly revealed.

Marked For Life is the English translation of Swedish author Emeli Schepp’s first novel. The story is fast paced, moving the reader from one element and person to another. The story is told from two perspectives. One follows the current investigation, while the other is the story of events that happened in the past. The only issue regarding this particular translation is in the occasional awkward phrasing and bizarre word choice for certain English translations, which can lead to the occasional strange sounding sentence. Otherwise, this is a very good first novel and a thriller which reflects some current social elements.