On a Sea of Lies by Sean Richards 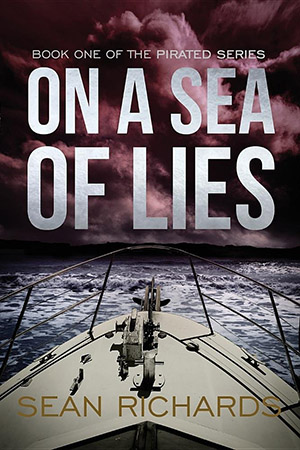 When United Airlines flight 305 inexplicably goes missing off the east coast of the United States, search crews are sent out to find and rescue passengers from the commercial flight. Ken Davenport, a scientist in the Air Force, notices that all areas have been searched except for the legendary Bermuda Triangle. Taking note of all the mysterious disappearances in this area throughout history, Davenport sets out to find answers for himself alongside with Drew Pearson, whose wife and daughter – Sara and Emily Pearson – were on flight 305. On their search for the truth and the missing plane, Davenport and Pearson discover secrets and hidden agendas, causing their lives and the lives of the passengers to fall into danger.

Although a tad lengthy, On a Sea of Lies will hold any reader captive with constant action and plot movement. Despite its formidable length, this novel proves a surprisingly easy and quick read, perfect for any reader – beginning or experienced – of the action and adventure genre. However, for those looking for a novel to pique their intellect rather than an action novel with a hint of legend, this may not suit their reading preferences. Characters Ken Davenport and Drew Pearson both resemble the perfect heroes, with flaws and character development throughout the novel, allowing for the reader to develop ties to both. As people, both Davenport and Pearson are truly believable people and speak to the reader through their actions and dialogue. Utilizing the inexplicable legend of the Bermuda Triangle, Richards creates a state of constant suspense. While this is highly enjoyable for most of the novel, some sections are overly dramatic and could be lessened to prevent a loss of interest in the overall story. Providing a meticulously organized novel of high seas and plot twists and turns, Sean Richards’ novel On a Sea of Lies and any future installments in the series should be read by all readers, especially those with a love for adventure.