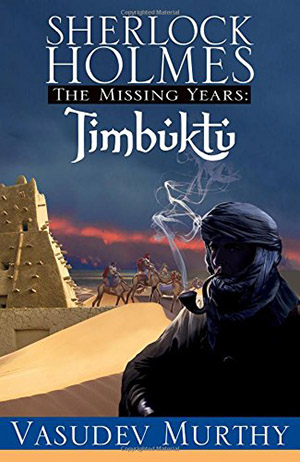 Authoring a Sherlock Holmes mystery story these days is open to any aspiring writer. The copyright has run out on using the Holmes character, first invented by Arthur Conan Doyle, and the result is a slew of good, new Holmesian page-turners by others. Some of them, like Sherlock Holmes, The Missing Years: Timbuktu, by Vasudev Murthy, attempt to fill in and explain the so-called “missing years.” Those are the years between the 1893, when Conan Doyle killed off his famous sleuth in “The Final Problem,” and 1901 when he brought Sherlock and his sidekick Dr. Watson back to literary life in “The Hound of the Baskervilles.” If details of the Doyle/Holmes backstory interest you, some of them are explained by Murthy’s editor Barbara Peters of Poisoned Pen Press at the front of the Timbuktu novel, and more is revealed by J.K. Armstrong online at bbc.com/culture/story/20160106-how-sherlock-holmes-changed-the-world.

Vasudev Murthy’s Timbuktu is one of the new ones, and it’s a blisteringly hot read, both literally and literarily; as the Sahara Desert is hot, so too is the plot of this book. This Holmes adventure (as told by Dr. Watson) is full of intrigue and risk, desert sun, sand, and scimitars. It draws on the travels and legacy of that real-life 14th century globe-trotter, Muhammad Ibn Battuta (a near contemporary of Marco Polo). The plot revolves around tracing a contemporary but fictional Battuta descendent, an Indian merchant named Thalassery Vatoot Mohammad Koya, on his way to Timbuktu to claim a long lost manuscript bequeathed to a future male heir by this noble ancestor. Note that Koya’s name, Vatoot, cleverly identifies him as a modern heir to Batutta. Koya, is being followed by Holmes and Watson, who, in turn, are being pursued by Holmes’ great adversary, Professor Moriarty. As complicated as it sounds, all of this is easily worked out in a plotline full of hair-raising twists and turns.

Along the way, Holmes and Watson visit the Vatican to pick up some clues about the Batutta manuscript they’ve been commissioned to find. From Italy they move to North Africa, where they are escorted across the sands to the ancient center of learning at Timbuktu by Touareg tribesmen dressed up in their desert garb, including the traditional blue ‘tagelmust’ turban.

Here’s how Holmes describes, as Watson writes it, what they are getting into. It gives us a taste of the old Conan Doyle style in which Sherlock Holmes mysteries should be written:

“The machinations of man, Watson, are beyond the realm of imagination.” Holmes’ muffled voice was heard from behind his indigo tagelmust. “Even now, we are working hard to thwart diabolical plans. We are completely cut off from civilization, moving slowly through the endless Sahara desert, with no guarantee we will reach our destination and get our hands on the manuscript. We have only each other, Watson, to remind us of a different life, when we smoked quietly in the evenings at Baker Street.”

“What of Professor Moriarty, Holmes?” I asked.

“I have no doubt he has guessed that we have taken a caravan across the Sahara to Timbuktu. We are safe only because of remoteness. Danger actually escalates as we near Timbuktu. Will someone be lying in wait for us?”

That’s only a snippet of what’s going on in the story. As you read it, you can count it heading into danger, else it wouldn’t be a Sherlock Holmes mystery. Timbuktu is in tune with the cultures and histories of each location. It is well-plotted, exciting, and very readable. One of the best.