The Beatings Will Continue Until Morale Improves: Leadership the Antarctic Way by Dr. Roger Podell 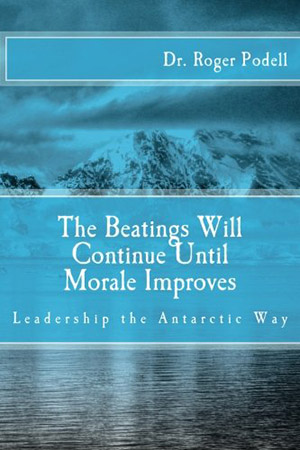 In his book The Beatings Will Continue Until Morale Improves, Dr. Podell sheds refreshing insight into a subject that many have found fascinating – The “Golden Age” of Antarctic exploration. Well-researched and meticulously organized, Podell weaves together the stories of many men, embarking on different excursions to the southern-most continent throughout several decades, and admirably does not get lost in details that would cause confusion to the reader.

The intended audiences for this literary project are those who are interested in learning basic and overarching concepts of leadership skills, but are not interested in reading dense academic prose that often spell out inapplicable and detailed information. The ideas in the book are not nuanced or overanalyzed, and would appeal to those who are completely new to the subject of leadership and management. Readers of this book may also be unfamiliar with the incredible stories surrounding the frantic discovery of Antarctica. Perhaps because of this Podell writes in a familiar and easy way, shying away from technical jargon of any type, regardless of whether it is leadership terminology or specialized prose surrounding early twentieth century adventure travel. His narrative allows novices of both concepts to feel comfortable with the portrayal of information, which in turn ultimately helps them grasp and internalize the lessons that drive the book.

While the book is about both leadership ideas and Antarctic exploration, without a doubt the majority of the book is spent on the latter rather than the former. This unevenness gives way to a slightly jarring narrative that holds abrupt transitions from the cold plateaus of the Ross Ice Shelf to brief and succinct explanations of lessons in leadership. This format is episodic in feel, and takes a while to get used to. However Podell’s views on leadership, explained through the fantastic examples left by these explorers, are valid and valuable. Although there are not many words – or time – dedicated to discussions or explanations of leadership issues, it is apparent that Podell has a clear vision of leadership that he keenly desires to communicate. The somewhat disjointed format of the book is validated through its predictability, much like considerate texts such as textbooks. Once the reader is able to identify the structure of the prose, the formatting becomes an advantage and allows the reader to begin to analyze the leadership decisions made by various men before Podell ever tells them his view. This allows for the reader to draw independent opinions and conclusions on their own, which may be a new endeavor for those unfamiliar with thinking extensively on leadership.

Antarctic exploration is a fantastic subject and the stories are so exciting it is difficult, sometimes, to remember that they actually happened. Podell is able to use this excitement and combine it with excellent storytelling, in order to trick readers into devouring the most exciting book on leadership and management skills they are likely to ever read.