The Boy in the Painting by C. D. John 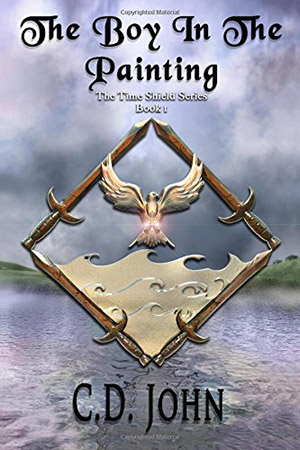 The Boy in the Painting, by C. D. John, is book one in the Time Shield series. The story opens in the unassuming town of Cherryfield, a small town tucked away from civilization. In a place where everyone knows everyone, there’s not much excitement to be found; however, there is one thing that makes Cherryfield unique. A small collection of paintings housed in a private museum creates something of a haven for seventeen-year-old Sarah, who is smart and worldly, but also nerdy and unpopular. She is picked on ruthlessly and with few friends and a love for the era of the paintings, she often finds solace in wandering from room to room throughout the museum. On a final class field trip for the school year, Sarah finds a secret room with a painting of a boy. This painting is different, however, because this painting moves.

Mark Louis de la Mer, as Sarah learns, has fairy blood through his mother Catherine, though his father was human. His father eventually learned the truth after Catherine saved Mark’s uncle Astor from certain death. Astor became obsessed with finding out what magic Catherine had, and harnessing whatever power he could. Astor left the family, striking out on his own for a period of years, and returned with a young wife. Catherine, though watchful, discovered Astor’s plan too late. Mark’s father was murdered. Catherine was able to save Mark, but Astor and his wife, Elishta, escaped. To give herself and Mark time to develop their abilities, Catherine places Mark in a Time Shield – the painting – but everything goes horribly wrong when the spell is cast. First, the Time Shield is immediately bound by a holding spell, meaning Mark can never leave the location in the painting and is trapped forever. Second, Catherine is cast into another realm. Mark must convince Sarah that she is brave enough to enter the Time Shield, and he must train her physically, mentally, and emotionally to destroy the stone holding spell. Sarah is young and human, and Mark, though magical, has a long way to go in his own training.

Because this is the first book in a series, there is a lot of setup happening. C. D. John creates a world irresistible to Sarah, which is irresistible to the reader as well. Cherryfield is a small town you’ve never been to but can imagine being in, filled with people you can relate to. C. D. John works magic and fantasy into an otherwise ordinary existence. Sarah’s decision to help Mark and free him from the holding spell is the perfect adventure for the first book in a series. C. D. John adds the right mix of questions, characters, and resolutions to make this a satisfying book and will make readers want to read the next one. However, because there is so much to introduce, there are a lot of characters and details that are a bit blurry in the beginning, and there’s a lot of room for character development.

Of C. D. John’s writing style, a point to appreciate is her decision to use strong vocabulary. The idea of a disparity of how time passes on each side of the Time Shield is a nice mechanism to keep a human character believable, although I think the boundary of how that time passage is used can be pushed harder, as opposed to used in passing.

Overall, The Boy in the Painting is a fun read that is the setup for what will likely be an enjoyable series full of twists and turns, and a new take on the typical fantasy creatures.