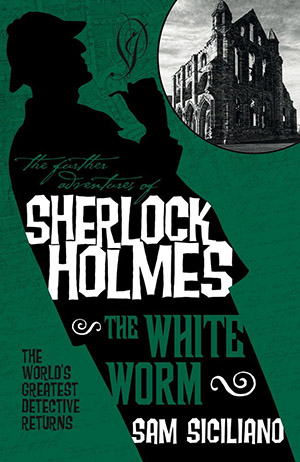 The Victorian author Arthur Conan Doyle (1859-1930) wrote what has become, arguably, the world’s most popular series of detective thrillers, featuring the master sleuth Sherlock Holmes. In recent years, as the copyright has run out on Holmesian mystery writing, many others have tried their hand at copying Doyle’s style, with generally good success. Sam Siciliano’s The White Worm reminds us of Doyle’s popular story, The Hound of the Baskervilles (1902). Both take place out on the moors of Britain and, Hound-like, The White Worm is dark, mysterious, riveting and is a challenging read—as such stories should be.

It begins with a visit to London’s Baker Street home of Sherlock Holmes (the sleuth) and his friend Dr. Watson (the story teller) by a troubled young man named Adam Selton. Adam intends to marry Lady Diana, but has been put off by an anonymous letter implying that there is an ancient curse on Diana’s family and that marrying her would put him and others in grave danger. Adam wants Holmes to find the purveyor of the threat and stop him or her from interfering. Does someone else love Lady Diana and wants Selton to bugger off, or is something deeper and more sinister afoot?

New Sherlock Holmes stories like this one must, at their best, emulate Conan Doyle’s style and portray Holmes’s insightful manner of investigation. The White Worm does just that. Here’s a passage, for example, where Holmes ponders his role as a sleuth:

“My profession as a consulting detective has exposed me to the darkest and most sordid side of human nature [Holmes muses], so much so that my prejudice is always for the worst. Thus, all my instincts tell me there must be a lover, but […] there are no viable candidates, none. […] No, I may have to accept that there is no lover ‒ although I do not have to like it.”

But what other explanation could there be, we wonder. As the plot thickens, strange happenings on the moors will quickly capture your attention. Be prepared to be baffled by the fantasy and illusions that arise (literally) before you.

Late in the book, Holmes thinks back on the clues he’s found and the leads he’s followed, which suggest to him an alternate title to the story: “The Case of the Befuddled Bachelor.” It could as easily be called the case of the befuddled reader. But, all in good time, dear reader, Holmes cuts through the mysteries (there are several) and successfully un-fuddles them, to bring the story to a successful Holmesian conclusion.

This Sam Siciliano mystery, the latest of several in his Further Adventures of Sherlock Holmes series, runs on a tightly wound plot, which will keep you on the edge of your chair. It’s a good read for a dark and stormy night.