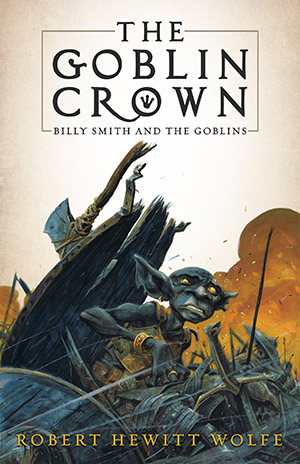 Robert Hewitt Wolfe’s The Goblin Crown is the start to the fantasy series, Billy Smith and the Goblins, and combines the elements of goblin culture, disasters in high school and destiny, and is layered in mythology, adventure and magic. Billy Smith’s first day of high school is full of embarrassments and insecurities along with being chased by the football quarterback, Kurt. Billy and his new friend, Lexi, attempt to escape from Kurt until all three of them are transported to another world full of goblins, magic, and King Sawtooth – a greedy general, who is recruiting goblins to fight the Hanorians. These Hanorians are humans who possess fire magic and are trying to invade the goblins’ home. Hop, a friendly and tortured goblin, witnesses the goblin crown’s ruby pulse red. According to the stories, this means a goblin king has arrived to save them. Billy and his friends must survive in this new world, figure out how to get home and help the goblins.

This novel is told through multiple third person point of views and uses short sections of main characters’ viewpoints in each chapter. The reader can relate with Billy and Lexi, while understanding goblin culture through Hop’s point of view. This allows for character development of protagonists in every chapter. The reader gets a different point of view from blunt or sarcastic to uncertain, allowing each character to be showcased. Due to the different point of views, readers should follow the intersecting stories carefully to understand the involved world building and culture of the author’s crafted world.

Culture and tradition are very important in this novel. The author uses vivid descriptions and even created a language for the goblins. Some of these words are used in the novel and an appendix has been provided as well as information on goblin names and the Hanorian Empire. A map is even provided at the front of the novel for readers’ visual enjoyment. The crafted songs, magical goblin wizards, and traditions of goblin culture allow the reader to connect with the world and goblins’ aspirations and fears.

The Goblin Crown is sprinkled with themes and lessons from handling guilt to responsibility. Readers will relate to both the characters’ experiences and connect with the lessons learned. This is a coming of age novel that will delight readers who enjoy imaginative fantasy worlds full of suspense, adventure, and descriptive world building.