The Pack by Thomas Ritman 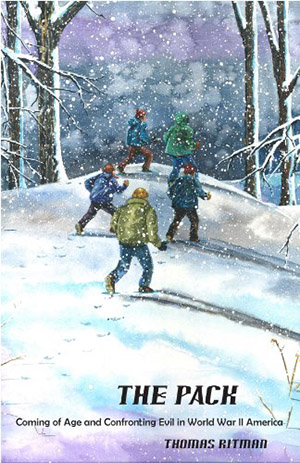 The Pack, by Thomas Ritman, is a solid coming of age tale set during World War II with a heaping serving of sex and murder, a side of love story, and a dash of complex societal issues. It follows the 14-year-old, righteous misfits Man, Huge, Oats, Jim, and Nob (the Pack) as they face loss and grief, fall in love and struggle with lust, and even solve a murder.

In many ways the intelligence and progressive outlook of these boys is a pleasant change from the common depiction of young teens as hormonal, mindless, and uselessly narcissistic. It also comes across as being bizarrely anachronistic, touching on issues like interracial couples, mental illness, early modern feminism, and homosexuality with a very present day perspective and unusually universal acceptance from the Pack and their growing group of companions. Many of these companions are female and, gratefully, they are written with the same strength, intellect, and respect as the male characters, especially considering the era being depicted.

While there is an overarching plot in the ferreting out of the identity of a killer, it is almost incidental to the novel which seems to be more focused on the premise that with solidarity and love the Pack can get through even the worst that life has to throw at them. The reader should be aware, before giving this book to an adolescent, that there are both graphic sex scenes and descriptions of grisly murders, which may not be considered appropriate for all readers. The Pack is well written with a strong voice in the straightforward and honest narrator Man, whose real name is, incidentally, given as Tom. The characters are consistently interesting individuals, the setting feels realistic, and despite being a slice of life story it never gets boring or bogged down in minutiae.