The Things of Man by Vince Wheeler 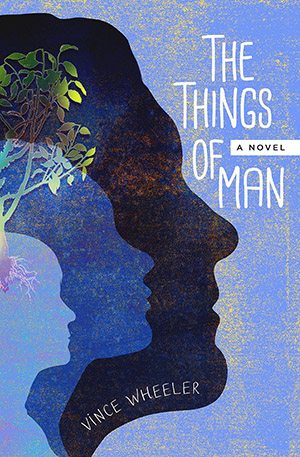 Vince Wheeler’s The Things of Man follows Brad Manford, a seemingly average lawyer from Santa Monica who suddenly decided he had to move to Kansas. Uprooting his wife, Sally, and his sickly son, Eamon, Brad finds a position at a small but prestigious law firm and moves his family into a large house that he felt strangely drawn to possess. Despite the fairly picturesque and seemingly ideal life, readers gradually learn that Brad is hiding quite a few things from his family. When the real world and memories clash, Brad is forced to acknowledge something is terribly wrong about his past, and he may not be who he thinks he is. Then, to muddle things further, Sally notices that the area around the backyard sandbox is growing out of control, almost as if there were something supernatural at work.

The Things of Man is a surprisingly captivating novel. It’s an interesting hybrid, mixing general fiction with science fiction in an unexpected and wonderful way. Much of the focus is on the slow unveiling of Brad’s past, but the mystery surrounding the cause of the rampant growth around the sandbox takes precedence in the latter half of the book. It’s difficult to discuss the resolution of the book in a way that doesn’t spoil important plot points, but the ending of the story is leagues away from where you suspect you’ll end up when first starting the novel.

Brad’s journey of discovery, or rediscovery, aside, the book’s real emotional and tension building sequences revolve around Sally and their son Eamon. It’s impossible to watch Sally struggle to keep house, homeschool, and keep Eamon properly medicated without the support group she used to have back in Santa Monica while Brad is off on work related trips, and not share in her feelings of stress, loneliness and sorrow. Her rationalization for her slow-developing drinking problem is easy to understand, and heartbreaking.

Despite some minor clunky pacing, and the occasional awkward phrasing, this is an enjoyable read. The small cast of characters in The Things of Man is what really makes the book work. Though they aren’t the most interesting of characters, or the most colorful, they manage to come across as real and tangible. Recommended for fans of general fiction who also don’t mind delving into the realms of science fiction on occasion, The Things of Man is worth taking a look at.