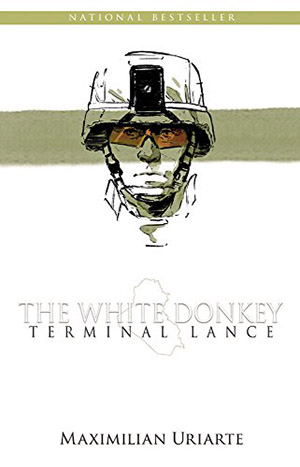 The White Donkey: Terminal Lance, by Maximilian Uriarte, is a graphic novel about one soldier’s experience in the Iraq War. Albraham Belatzeko, or Abe as he’s known by most people, signs up for the marines because he couldn’t find what he was looking for back home in Oregon. His journey of self-discovery takes him through boot camp to the frontlines of Iraq, where he struggles with personal relationships, power struggles in the ranks, and making snap decisions with lives on the line. When all is said and done, will Abe’s experiences have made him grow, or break him?

While The White Donkey begins with a note that says “This is a Work of Fiction” in full caps and in big, bold letters, the situations faced by Abe are all too common. Having several military veteran friends and family members, reading this graphic novel felt eerily familiar, as if I’d heard the story a million times before. In one sense, the story does function as an everyman tale – it has something that every veteran, or veteran’s family and/or close friends can identify with. The scenes from boot camp hearken back to films like Full Metal Jacket, but any veteran will tell you that they too experienced superiors that were incompetent and were less experienced than the new recruits. Abe’s relief to be home for leave right before deployment, his inability to connect with friends and family after his first tour of duty, and his struggle with PTSD after a run in with an IED that changed his life are experiences shared by many.

Maximilian Uriarte himself is a veteran, and while his story may be fictional, it is clear that his personal experiences helped frame the narrative he chose to tell. The book’s illustrations are primarily done in black and white, with occasional color choices to emphasize scenes and moods. Uriarte also used real people as references/models for some of the characters in the book. The original print run of The White Donkey was funded through a Kickstarter campaign, although the current edition is being published by Little, Brown and Company.

This is a wonderful book for anyone interested in the Iraq War, and how difficult it is for our veterans to readjust to civilian life. The graphic novel formula may make this story more accessible for those who aren’t willing or don’t have the time to read a biography or other nonfiction book about the ongoing conflict.

For a memoir about a local veteran’s experiences that are incredibly similar to Abe’s, check out The Wax Bullet War, by Sean Davis.