You Are a Complete Disappointment: A Triumphant Memoir of Failed Expectations by Mike Edison 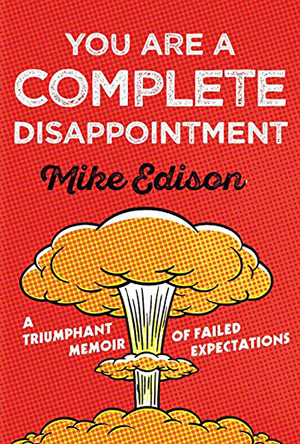 “If you find yourself on your deathbed, using your very last breath to rip into your kid… I think it is fair to say you have some seriously unresolved issues.”

Musician and writer Mike Edison invites you to the family table for a heaping plate of kvetching. At its best, You Are a Complete Disappointment conveys genuine melancholy and visceral frustration. At its worst, it reads with awkward affect to mimic the folksy, barbed charm of Jean Shepherd.

This is by no means a bad book. It’s clear that Edison has a lot to say, knows how to write, and knows how to reach his established fan base. As this was my introduction to his writing, though, and I found the interchangeability of profanity and pretentiousness to be jarring. Writing about one’s self requires just that much more self-scrutiny, objectivity, and explanation for the environment that surrounds the subject. Here is where You Are a Complete Disappointment falls especially short for me.

By the final page, I was left scraping for information. Who was his father? Who was his mother? Who are his brothers? How do these five human beings relate to one another? Edison never connects his siblings’ childhood experiences to his own. We never get to know the other boys. So when the complaint is repeated ad nauseam that Mom and Dad had higher hopes for his brothers… there is no evidence for why or how. I kept expecting a bit of brotherly feedback, some sort of confirmation or commiseration. Instead, the whole ordeal just feels heavy-handed, detached, and self-centered.

The memoir does begin to lift around the halfway mark. The reflections shared on family members’ passing and the overall writing style become more relaxed and focused. Artless honesty replaces long-winded tirades. Edison’s simplest observations ring the most true, the most telling. When he laments “I knew it wasn’t going to be easy mourning for a guy who clearly didn’t like me very much,” describes his mother as having “a long history of not being her own best friend,” or admits “I felt like crying, but I kept a lid on it because I was in a bar after all, and I didn’t want to be that weird Jewish guy weeping in the corner,” I felt as if the one-dimensional puzzle I’d been poring over was revealing peeks of the Bigger (and far more complex) Picture.

This was a heavy read for me—though not because of its titular theme of Disappointment. There are great lines of comedy and insight sprinkled throughout, but not often enough to give the reader a moment’s recovery from the plodding pace. To quote Edison himself, “There is a lot I haven’t even told you—just awful conversations, rotten, despicable hoodoo, a lifetime’s worth of put-downs.” Why? Why haven’t you told me, the reader? I felt as though I was limping towards the faint, warm light of the last page.