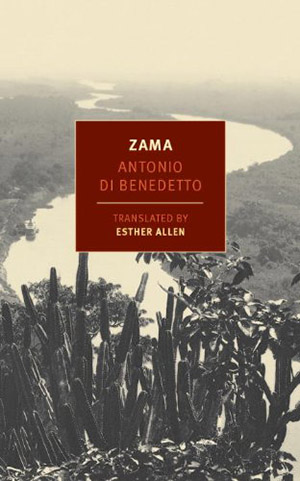 What I despise most of all from a book is inaction. Something must happen. The protagonist must change in some way. There are many great books where seemingly few events transpire, but on the consciousness of the page, great changes are taking place. Or, if there are no changes and the book is an exercise in the form of consciousness, at least the act of reading the words have pleasure (e.g., Ulysses). I have perused many books wherein the protagonist suffers from isolation and indecision (e.g., Auto-de-Fe), but at least there is entertainment in the story. Zama attempts to be one of these thrilling novels of internal torment in which we glimpse at the face of the human condition, but instead what we get is terrible slough of a book whose form attempts to mirror the protagonist—the problem being that the protagonist is made solely of imaginary worries and isolated inaction.

The novel divides itself into three separate parts, each following the affairs of Don Diego de Zama as he awaits word of promotion from the Spanish King as he is stationed in a remote region of its American empire. The first part consumes itself with waiting for the boat that brings word of Zama’s promotion. But it never comes. While waiting, he concerns himself with lusting after various Spanish women, imagining great romances in his head that are never brought to fruition. Even though he is the second most powerful man in the area, he constantly feels judged by his peers and constantly nervous as to how his actions will be reviewed.

The second section picks up four years later where little has changed for Zama. He has produced a son now with a lower class woman and has gained a personal secretary, but still all his plots concern word of the promised advancement from the King. Zama has also been neglected by the crown monetarily, so that he is forced to take residence with a somewhat impoverished host and borrow money from his secretary. All the while, he is thoroughly consumed with his amorous fantasies regarding his host’s elusive wife and how he can exploit the woman in the window across the way, who seems to have taken a fancy to him.

The third, the shortest, and the most interesting of the sections, sees Zama head a military expedition to capture infamous scoundrel, Vicuna Porto, in the interest of gaining some notoriety for the sake of his advancement. But the expedition is less than beneficial. The regiment’s officer does not hand over command and Zama is left always two steps behind. Zama eventually discovers that Porto himself is disguised as one of the troops, but fails to inform the regiment officer for weeks for fear of opening himself up to disaster. When he does decide to act, disaster ensues. Porto captures Zama and dismembers him.

That’s it; a whole lot of waiting alongside Zama, all told from his neurotic and inactive perspective. Zama, at one point, even becomes aware of his own inaction and neurosis, his imaginings not real but a “projection of [his] afflicted consciousness” (155). None of this stops him from acting the fool. His dismemberment is clearly a symbolic gesture to impotence of his own inaction and, in the end, despite his age, he comes to realize that he has never grown up at all. Zama is all the worst parts of being a teenager carried over to middle age and obscurity. By the transitive property of literature, this is carried over to the reader as well. We live this petty life alongside Zama. As this is clearly the author’s intent, he succeeds admirably. I know many peers who will probably love it for its clean prose and reflexive style, but as a critic, as someone who seeks literature beyond the ordinary and mundane transcribed to the page, I was left wanting just like Zama as he stands on the docks when another ship has arrived without his back-pay or letter of advancement.