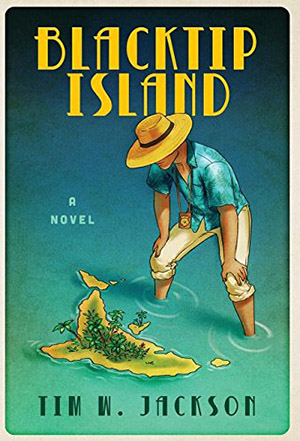 “Timing’s everything, you know?”

Timing plays a significant role in everyone’s life and it is especially important for the book’s protagonist, Blake Calloway. Blake, a “crappy bonds trader,” as he once introduced himself, made a mistake. After several unsuccessful attempts to correct it, this small mistake has turned to an “avalanche.” He is fired and the Feds are after him. Thinking of how to avoid being arrested for embezzlement he moves to Blacktip Island, where he has recently spent a few days on a short vacation and met a beautiful woman working in the local bar. Looking for a solution for his troubles he starts a new life as a modest scuba dive master, expecting that it wouldn’t be easy to find him in this remote Caribbean paradise. Sadly, it didn’t take too long for even his brother (not to mention the Feds) to find him. The strange and unconventional locals don’t make his life easy. Moreover, there are bounty hunters and some other people after him and the missing money. He can’t relax even for a moment and sees an enemy in everyone he meets. Will he be lucky enough to escape?

Blacktip Island is the second well-written book of a former photojournalist and award-winning novelist Tim W. Jackson, who, like his character, worked as a scuba dive instructor. The author applies the combination of his various skill sets quite successfully in his writing. The language is light; the descriptions of the island, its dive sites, and book’s characters are vivid and picturesque. The book is fun and funny, so this reviewer recommends that you take your time and dive into this adventurous story. Unlike the protagonist, you can relax while reading and imagining yourself in this fictional paradise. Interested readers can find more details about Blacktip Island, its odd inhabitants, and their life by looking at The Blacktip Times, a hilarious fiction-blog run by the author.