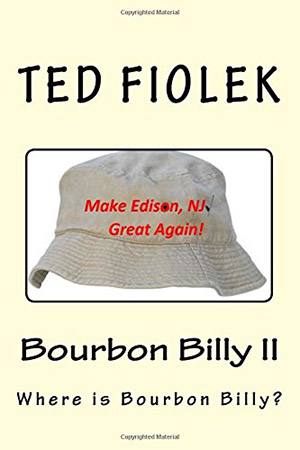 “There is no other conclusion I can draw other than this: the gods don’t want us to be noble.”

This is an assumption that Tony Violette, an accountant and one of the book’s main characters has come to after being tired of trying to be honest and doing the right things. It would be probably true to say that, from time-to-time, many of us experience similar thoughts for different reasons. So, what happened to Tony that has brought him to this conclusion? You’ll find that as well as spending six month in jail (as he is convinced – unfairly), Tony has a lot of other issues to deal with. He is convinced that practically all these troubles happened to him “thanks” to Willie Rocinante, who is now in witness protection. Tony is seeking revenge by publishing a book about his case and scheming a plot against Willy and Sammy Riscatto, their former dishonest lawyer.

As you see there is a lot of material to write a drama, but instead, Ted Fiolek wrote a brilliant satire. Where is Bourbon Billy? is the second book in Bourbon Billy series (the third book is on the way) and is hilarious. This book is also set in New Jersey and has the same crooked unfortunate main characters. Surely, the readers of the first book will gladly pick up the second one to follow up on the kinked adventures of Tony, Willy, and Sammy. However, it isn’t necessary to have read the first book. Bourbon Billy II is a fun read by itself. None of the book’s characters are noble, there is no taboo subject for the author, and he ridicules many vulnerable points. He scorns corrupt and cynical politics from both sides of the political spectrum, IRS, FBI, welfare and witness protection programs, religious zeal, and bigotry. Golf plays no small part in this narrative. If you are a golfer, you know (and if you are not – you can guess) how difficult it is to get a hole-in-one, but it seems that here the author, Ted Fiolek, has managed.