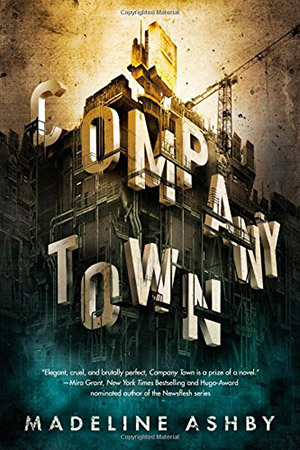 Company Town, the new novel by Canadian author Madeline Ashby tells the story of Hwa, one of the only people on her Newfoundland oil rig and associated company town that is not augmented. Hwa was born with a visible genetic disorder, and in this period of ready genetic engineering, this is enough to render her as an outcast. Smart and self-sufficient, Hwa encounters security for the new company which has just purchased the rig. After a violent encounter with the head of security, Hwa is enlisted as a bodyguard for the company heir, and high school student, Joel.

Ashby is a rare treat in a novelist, one who has thought deeply and well about the ramifications of her world, but still manages to tell a good story around it. One of the primary occupations of both this and Ashby’s earlier novels is the interface between computers or technology and humans. While earlier novels made the author’s deep thinking readily apparent, sometimes at the expense of the story, Ashby has solved that problem in Company Town. The characters are fully developed and real, with believable motivations, and personality quirks that all readers will be familiar with. She also manages to create an exciting adventure story. As the book progresses, readers may think they see the solution, but the twists and turns of the plot at the end will leave surprises for all but the most attentive and astute readers. A word of warning-this is an adult book. Even though the characters are young (Joel is only a teenager), it is recommended for only very mature teen readers. There are a number of adult themes (Hwa starts the book working protection for a prostitution service), and there are several graphically violent scenes the result in the death of characters. Despite that, this book is highly recommended for adult and older/mature teen readers. The quality of the storytelling and the obvious thought given to the repercussions of human/technology interfacing make this a book worth reading.