Drag Teen by Jeffery Self 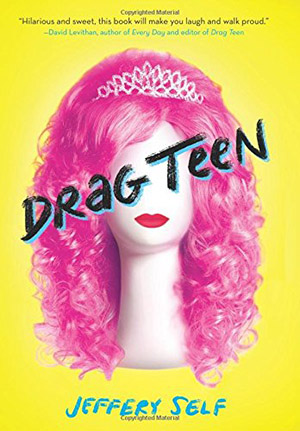 JT is a gay teenager who is uncertain about his future, in spite of his great friends, a cute boyfriend, and his acknowledgment to himself that he has it better than previous generations of gay men. His boyfriend, Seth, is leaving for college out of state next year, while JT himself can’t afford college. He worries he’ll be stuck working at his family’s gas station for life, unless he does something that terrifies him: compete in a teenage drag queen pageant for the chance at a scholarship. His only previous experience with drag was in a disastrous school talent show, plus this competition will be held in New York and JT doesn’t have a cent to his name to travel there from Florida. Can he make it? Of course he can!

Drag Teen is not Generation X’s gay young adult novel. JT’s homosexuality itself is not the source of his troubles, and in fact, he insightfully points out that in his day and age, he can’t blame being gay for the reason he feels like an outsider. A novel about this topic set in 2016 highlights how far the LGBT community has come: most of the gay grown-ups JT meets are married; JT was able to come out at a young age and get a boyfriend in 9th grade; and even in a smallish town in Florida he is only a misfit for being overweight and shy, not for being gay. It’s refreshingly different from what a gay high schooler’s story would have been even a mere ten years ago.

It’s also quite different to read about a regular, working-class gay teenager, with realistic money problems and an ordinary, non-glamorous, low-fashion life. However, this depiction is undermined somewhat when many of his obstacles are dissolved by wealthier characters throwing money at him. Still, it’s a pleasant change from shows like Glee, where no one ever seems to lack money or even a new outfit each episode, and it makes JT even more relatable and his struggle more real.

This is an encouraging, wish-fulfillment tale for young LGBT people, a typical duckling-to-swan story about following dreams, being yourself, and all those other inspirational clichés adults think teenagers need to hear. But JT’s journey is too easy and too perfect, and for the most part, he succeeds because people rescue him. On the road trip from Florida to New York, he just happens to meet the perfect mentors for him at that time: a surly, aging drag queen, then a former country singer who conveniently lends him an arsenal of wigs and gowns. Later, when another contestant in the pageant tries to sabotage him, his rescue is so contrived it might as well be a guardian angel swooping in. Aside from an incident where JT shows initiative in being kind to another drag teen who is struggling, it seems as though the story is more of a series of outside forces acting upon him, rather than circumstances of his own making.

His gal pal, Heather, and boyfriend, Seth, are also problematic, particularly Seth. His advice to JT reads a bit too wise and adult-sounding for a teenage boy to be dispensing. JT’s constant descriptions of how hot Seth is also get tiresome—we get it, he is perfect. Even when he reveals a dark secret he had been hinting at throughout the story, it’s not such a big deal, although it could be a matter of perspective and this small thing could be devastating for a popular high school boy if it got out. And poor Heather—described as even more overweight and eccentric than JT, never landing a good guy in spite of all her efforts. One hopes that there will be a sequel where Heather comes into her own in college and discovers her own fabulousness.

However unrealistic, the story is the kind that would be very enjoyable to a real-life JT, an awkward, young gay man, who doesn’t quite fit the polished, Bravo TV mold of modern homosexuality. Who wouldn’t want JT’s supportive friends who always put him first, his beautiful, popular boyfriend, and his country singer fairy godmother? Drag Teen could be a light, comforting read, if you approach it with suspended disbelief.