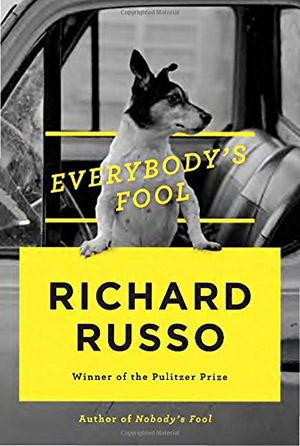 The residents of North Bath are not easy to get along with. In Richard Russo’s 1993 novel Nobody’s Fool, he painted a picture of a gritty, down-on-their-luck town in upstate New York, always falling behind the pristine, idyllic rival town nearby. The town is filled with blue collar residents who spend evenings together at the local watering hole, swapping secrets, cursing enemies, and visiting friends. Russo brings readers into small town drama and it’s a hard fight to leave new friends.

In his most recent novel Everybody’s Fool, Russo returns to North Bath where the same characters fill his pages; the protagonist of Nobody’s Fool, Donald “Sully” Sullivan, graces the pages a bit older, richer, and with an even bigger (although now failing) heart of gold. Though Sully appears every so often, the book’s main focus is on Doug Raymer, the slightly clueless police chief who always seems to be in the wrong place at the wrong time.

From the first few pages, Russo draws readers in for what is another excellent trip to upstate New York. So much so, that I found it even harder to leave the town a second time. Over the course of 24 hours, readers are even more enchanted by North Bath than they were before; introduced to characters on the police force, the mayor, and several good natured bartenders, it’s almost impossible to get the secrets and the local residents of North Bath out of your head.

A book about minor incidents in a minor town, the novel is overwhelmingly powerful. Russo manages to make mountains out of molehills – mountains you want to climb, hopefully with a few characters from his books to help you along the way. Even in 24 hours, the residents of North Bath can do enough damage, both to the infrastructure of the town and to your very own heart. Witty with a touch of cynicism, the narrative brings together something unique to a book in this day and age, characters who are empathetic to the experience of others around them and looking to make their community a better place.

Nothing goes right for the residents of North Bath until suddenly everything seems A-OK. And that’s exactly how Russo manages to win readers hearts, he shocks and surprises with every page but soon enough those qualities that may have disgusted you become more lovable with every passing minute. You don’t have to read Nobody’s Fool to dive into the pages of Everybody’s Fool but I would recommend it because you don’t want to miss a minute with Sully and the gang.