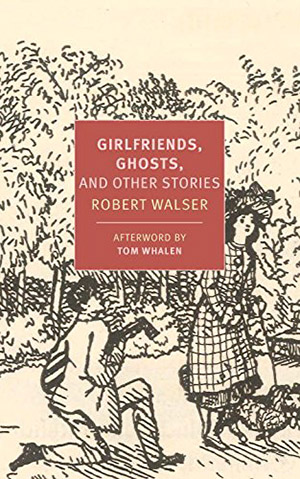 Girlfriends, Ghosts, and Other Stories consists of scores of delightful and lyrical vignettes (or sketches, as Walser himself would call them) of Swiss life in the early twentieth century, ranging from youthful country life to a more ruthless city life. Rarely longer than a couple pages, these sketches are like a dessert that goes down nice and easy, filling in the corners, leaving his audience comfortable, full, and content; and such is Walser’s intent. In describing what he wishes for his own writings, Walser hopes they share the fate of little volumes that are “read as if […] eating something delicious” (133); that is to say, he hopes his sketches are easy to read and quickly forgotten, but nevertheless recalled after a certain span of time and able to bring a bit of a smile in the recollection of them. With this standard in mind, I think it no difficult feat to proclaim that Walser is an unmitigated success.

From the beginning, Walser seems nearly obsessed with the idea of transience and the beauty that can be found therein, whether it be a nice summer day or the sight of a pretty girl. One of his most sublime sketches waxes on about ash, a needle, a pencil, and a matchstick. He suggests these items that are completely overlooked in the rush of our daily lives, and that in them resides something truly divine. He begins with ash and its complete lack of substance other than its being a sign that something once stood in its place. He advances to the delicate livelihood of the needle, useful only as log as it is handled with care. The pencil is useful as it is sharpened over and over, but ultimately it is sharpened to oblivion—its use the means of its destruction. And finally the match! It sits in its little box with all its companions, waiting until the day it is taken out and struck, only to then die by incineration. But there is no sadness as a result of this, but rather exultation: “The moment the little match takes pleasure in its destiny, it dies; the moment it unfolds its meaning, it perishes. Its joy in life is its death, and its waking its end. The moment it loves and serves, it collapses and altogether expires” (37). For Walser, the sacrifice of self for the cause of destiny and meaning seems the highest good and the highest beauty. In each thing there is a role waiting to be fulfilled, and beauty resides in this fulfillment. With recognition of our existential affinity to the match, as much as by the masterful and revelatory strokes of Walser’s pen, we, as his audience, are elevated so that we too might clearly witness the transcendence of the ephemeral.

Walser also commits the same care to his writings concerning his human subjects. He appears to be obsessed with watching people and how they interact, whether they behave true to self or false, whether he (or she—Walser spends a great deal of time contemplating women in society) be a philosopher, a writer, a youth in love, or a patron of a coffeehouse. This final personage provides one of the most intriguing sketches as it is here that we witness a sort of sadness in Walser concerning the excellence of fulfilling one’s role. He sits by, writing, as waiters come and go, carefully serving those who leisurely converse in banalities and read their newspapers. He transcribes, with hesitant apprehension lurking beneath, the resentment he feels in that workers should have to serve the leisure of others. But also, and perhaps more importantly, he notes that these people, in their leisure, stand by like a forgotten box of matches, fulfilling no purpose. Walser ultimately finds uncomfortable solace in the thought that workers are able to benefit from the worthlessness of the leisurely, for “if everyone was industrious, they stand, as it were, in each other’s way, and something essential in the whole apparatus doesn’t function, an imbalance occurs, with which words I mean to have disclosed the excellence of the coffeehouse” (151). He finds bitter reconciliation with this social injustice on the philosophical level, but underneath, on a practical level, he can hardly hide his discomfort in the abuses of class.

Walser seems to be a writer of principle, but nevertheless he remains a realist. He concerns himself with the mundane, and, in doing so, finds the everlasting. His purpose was to commit the ephemeral to eternity. This was his destiny. And it is our duty as readers to take up Girlfriends, Ghosts, and Other Stories so that we might not stand in the way of his duty—we must, sometime in the future, recall these sublime little sketches and breathe a sad little smile in fond remembrance of this wonderful little collection we once read by this guy named Walser who managed to find beauty—and to share that beauty with us—in the most unexpected of places.