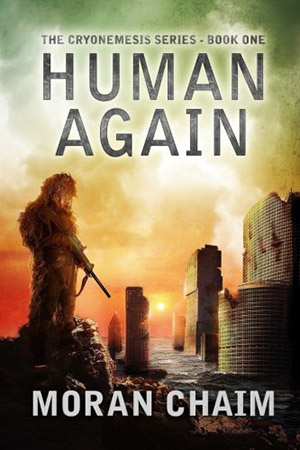 Human Again is the debut title by Moran Chaim, and is the first book in the Cryonemesis Series. Roy, of no apparent last name, wakes up in a hospital – which is strange enough given that his last recollection was of his violent death – only to lean that he had been cryogenically frozen and now finds himself in the year 2321. While Roy was sleeping, humanity has managed to mostly destroy Earth through pollution, overpopulation, ignoring climate change, and wiping each other out with wars. What is left are several groups of underground cities where humanity hides from the harsh environment outside, as well as the Purists – people who believe all technology (even lifesaving and potentially world-fixing technology) should be destroyed.

Within this underground city of Knaan a group of revolutionists fear how dependent humanity has become upon the simulations – digital worlds that people have chosen to retreat within – where the realities of the real world can be forgotten. Many people live entirely within their simulations, abandoning the real world completely. However, the system is fragile, the technology that sustains it is growing older, and the revolutionists realize that eventually their whole fragile ecosystem will collapse. The Purists are massing outside Knaan, and their periodic defense-testing attacks suggest that an invasion is only a matter of time. With the majority of Knaan’s population having been plugged into a perfect world simulation their entire lives, an invasion would be a massacre. Roy has to choose if he is going to join with the revolution and use his soldier training to try and get the population awake and in fighting shape, or if he will plug himself into his own personal simulation and hope for the best.

Human Again is a great post-apocalyptic premise that follows the path of many previous successful post-apocalyptic tales. It plays with the fish-out-of-water scenario of a man who wakes up in the future, the science fiction warning of humanity ignoring the signs of an impending apocalypse to pursue selfish desires, and the idea that technology can both save us, and ruin us. However, while Human Again follows some tried and true framework, it doesn’t do anything terribly interesting with the material. The technology (cryogenic freezing, underground cities, virtual worlds) are very familiar to long-time science fiction readers. The only semi-unique technology seen are the Cactus suits – suits that protect the wearer from the harsh outside environment and can blind security cameras – but are terribly impractical due to the wearer being stung by sharp metal fibers. This stinging feature doesn’t make much sense when looking at the lifespan of a suit, as if the material pricks its wearer, it will be pricking holes within itself, thereby defeating the purpose of protecting the wearer who will now have bleeding open wounds exposed to the environment that the suit was supposed to protect them from in the first place. There is also the question of how cryogenics in this particular world works, since Roy’s last memories are of him being killed in a battle. Sadly the necromancy/Frankenstein’s monster resurrection questions were never touched on. As far as we know from what the book gives us, if you pop a dead body in a cryo bed it will regenerate and the dead person will come alive, because… magic.

The writing style is fairly simple, and lacks quite a bit of detail. There were many places and ways the author could have elaborated to draw readers deeper into the story, but instead the light surface descriptions left much to be desired. The plot is also full of random conveniences as Roy meets the right people, finds the items he needs, and bumbles his way through the story by being in the right place in the right time. The moments of tension don’t really feel, well, tense. This ties back to the simple writing style, in which character building really suffers. All of the characters are very two-dimensional, and this makes it difficult for readers to really care one way or another about their plights. Roy is a very average character, and it really makes little sense why the resistance thought he would be the one to help them. Granted, it was nice to see a non-American, non-white main character. However, it did take some time to determine that Roy wasn’t an American soldier who had fought in the Middle East, but was in fact an Israeli soldier.

This isn’t to say that Human Again is a bad book. It is fairly timely, with the recent rush of VR headset technology now being accessible to the public, the debate about the benefits vs. negative impacts that VR technology could have on humanity is now reaching the public stage instead of being continually relegated to the realms of science fiction books and films. The book is short, coming in under 140 pages, and can easily be completed in an afternoon. Human Again is a decent debut, but one that is unlikely to stand out in the crowd of post-apocalyptic and Dystopian science fiction books that have been flooding the market over the last decade.