Kick Kennedy: The Charmed Life and Tragic Death of the Favorite Kennedy Daughter by Barbara Leaming 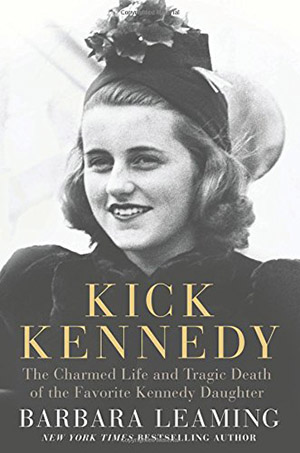 Barbara Leaming’s biography of the often forgotten Kennedy sister vividly brings to life both the life of upper crust America in the early 20th century, as well as the Britain of the immediate post-war period. Kathleen Kennedy, sister to Jack Kennedy, daughter of Joe Kennedy is often forgotten in this country, overshadowed by the major accomplishments of her politically successful family, and often overshadowed by the tragic assassination of her brother. Leaming re-animates Kick in this biography, starting with her arrival in British society as a young debutante, accompanying her father, the new American ambassador to Britain. Kick immediately becomes a part of the social whirl in pre-war London, socializing at the highest levels. She ultimately woos and marries a member of the English nobility, only to see him killed in the Second World War.

Leaming takes advantage of the Kennedy name to pull readers into her biography, but this book really covers a wider scope, notably the way the world changed before and after the Second World War. The author speaks with some of the last few remaining survivors of this period to get an idea of what the period was really like, and these interviews deeply enhance the quality of the book. She also manages to make this a book largely about England and the English, rather than America. Kick’s famous political family does make some appearances, but Leaming’s focus on the British perceptions and reactions to the “little American girl” make this account feel cohesive, and it resists the siren song of the other Kennedys. Ultimately, this biography is well written and accessible and will appeal to a number of readers, however it is particularly recommended for readers who are interested in the history of the period around the second world war, and the view from Britain. Kennedy historians will catch a few vignettes of Kick’s famous father and brothers, but they rightly remain in the background.