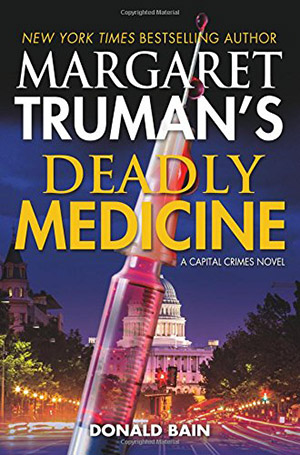 Deadly Medicine is the 29th novel in the Margaret Truman Capital Crimes Series. Since Margaret Truman Daniel (the daughter of President Truman) died in 2008, Donald Bain has continued the mystery series. He’s her ghost writer in the truest sense of the word.

You will be pleased with this one. While earlier books in the series were each set firmly in and around Washington DC, with titles such as Murder in the White House (and in the Smithsonian, the CIA, the Kennedy Center, etc.), this one starts and ends there, but also takes us abroad, briefly, to Port Moresby, the capital of Papua New Guinea (PNG). It’s a capital innovation! And we approve.

In it, you can expect to meet some of the Truman regulars, including the respectable, retired DC lawyer MacKensie Smith and his art dealer wife, Annabel, along with the wily private eye, Robert Brixton, and his lady friend, Flo Combes, who runs a woman’s boutique. It’s in Flo’s upscale shop that we meet the story’s main character, the beautiful Jayla King.

Jayla is a scientist working in a DC-based pharmaceutical company. Her mother (deceased) was a native of PNG, and her father, whose untimely death is at the heart of the story, was an American doctor in Port Moresby where he ran a health clinic and a small medical research laboratory. When he was murdered, Dr. King was apparently close to succeeding in creating a new pain medicine made from medical plants, as a safe alternative to synthetic opioids. Had he not died, he could have sold the formula for a fortune. When Jayla hears that he has been murdered she flies off to Port Moresby to find out what happened and to settle her father’s estate. The rest of the story is the fast-paced search for the murderer, and the formula.

These other characters also help move the story along: Dr. King’s medical assistant, an odd fellow named Wiksit; a lobbyist named Morrison, who represents the powerful pharmaceutical industry; a sleazy Senator named Gillespie, who is firmly in the pocket of Big Pharma; a handsome public relations consultant named Cousins; a pushy reporter named Sayer; and a few other individuals who dabble in crime. There’s also a blossoming love affair, some sharp and dangerous sleuthing, and a few inviting and informative DC dinner parties. All of this provides enough human interest, mystery and intrigue to keep you up late reading this alluring whodunit. The imaginative complexity of the long-distance plot will keep you fully absorbed right down to the last page.

There’s a technical error in the book, however, which I am surprised the fact-checkers didn’t catch. “There’s a big time difference between here and Port Moresby,” Jayla tells MacKensie Smith when he’s about to phone her lawyer in Port Moresby. “It’s fourteen hours earlier,” she says.

It’s not earlier in Port Moresby compared to Washington DC, it’s later. West of the International Date Line from Washington DC, today morning is today evening in Port Moresby and, by the same reckoning, today evening Eastern Standard Time is tomorrow morning PNG time. The error occurs twice (in Chapters 11 and 12) and though it will probably go unnoticed by many readers, if you’ve ever traveled west across the Pacific Ocean to Asia you’ll know.

That aside, the book is recommended for Truman crime series enthusiasts and newbies, alike. And when the 30th book in the series comes out, I wonder where it will take us.