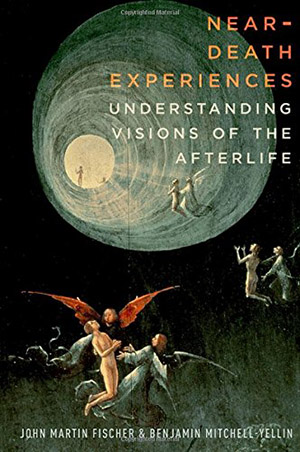 Don’t judge this book by its cover or title. Based on the depiction of the winged creatures shepherding naked humans toward the light at the end of the tunnel and the title Near-Death Experiences: Understanding Visions of the Afterlife, a reader might be prepared for an explanation for what people see during a close brush with death. Instead, professors John Martin Fischer and Benjamin Mitchell-Yellin, through examination and rebuttal, methodically debunk the current reigning theories and arguments that support a supernatural explanation. While the professors are careful to emphasize that they’re not definitively denouncing anyone’s experience, they insist on scientific, physical proof that can be studied and tested. They don’t want to rule out supernatural explanations but ensure that all of the physical ones are explored.

“The bottom line, as we see it, is that we should exhaust all possible avenues for explaining a given phenomenon by means of factors that fit into our usual, scientific worldview before we begin to take seriously factors, such as an immaterial consciousness or reincarnation, that do not fit into this paradigm.”

As one might expect from a book published by Oxford University Press, the authors’ analyses and critiques are presented as methodically as a dissertation. Each chapter undermines the root arguments that make some people believe accounts such as Eben Alexander’s Proof of Heaven: A Neurosurgeon’s Journey into the Afterlife or Lynn Vincent and Todd Burpo’s Heaven is for Real: A Little Boy’s Astounding Story of His Trip to Heaven and Back. For those who readily believe the credibility established by such books, the professors may have something to teach. However, for those who have already studied near-death experiences with a healthy amount of skepticism, their arguments will sound familiar.

While it’s clear that the professors have made valiant efforts to be comprehensive, they could have gone deeper into their research. The references section is only five pages long. One of the professors’ arguments is that LSD trips are often described much like near-death experiences but that these should not be interpreted as anything but illusions. However, since this is one of the most compelling arguments for a plane of existence beyond our awareness, it would have been interesting to see the professors discuss books such as Aldous Huxley’s Doors of Perception: Heaven and Hell, which they never mention.

Ultimately, this is a scholarly work for those interested in more perspectives on near-death experiences.