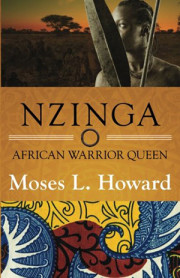 Moses L. Howard successfully blends two neighboring genres with his new novel, Nzinga: African Warrior Queen: African history and women’s history. Nzinga is the eldest daughter of the Ngola, or king, of Ndongo in modern day Angola. She lives in the late 1500s to early 1600s, during the time when the Portuguese have taken land in Ndongo and are not only trading with her people, but are also stealing some Africans away for the slave trade. Her father keeps them from encroaching further into Ndongo. She watches and listens as her father governs the people. Her intensity and interest in how everything operates makes her a very willing student far beyond the basics she needs to know as a princess. Her friends and guides repeatedly tell her that she should be the next ruler because of her willingness and her knowledge. However, in her culture, she cannot succeed her father as ruler. As a loyal family member, she supports her brother in every way possible once he ascends to the role of Ngola. Even though he wants her support, her brother is not interested in either ruling the people or giving her credit for what she does.

As an historical novel, the story develops in the basis of those essential facts. What Howard does well is create characters with incredible depth that flesh out the fragments of facts and myths surrounding her existence. His story includes not only the devotion and dedication of family and friends, but also the human intrigues of living with a people who are occupiers as well as the culture, family and times in which she lived. Nzinga: African Warrior Queen draws the reader in from the very beginning until the last page of the story. At the end of the book are three brief and helpful appendices: Characters, Place Names, and Glossary. All in all, this book is well put together.

Mary-Lynne loves adventure in her books and in her life. As a born daydream believer and gypsy, travel is a particularly strong passion in her life. She's traveled the United States from Maine to Louisiana to Washington, wandering occasionally into Canada. She's lived in places as wild as Chicago, Illinois and Cairo, Egypt. She is an educator, healer, writer, photographer, and all around spiritual practitioner. Her favorite photography subject is the Moon - and she has thousands of pictures of it as proof which she'll gladly share with anyone who asks! Follow her blog at unfoldingmyths.blogspot.com.
You might also like

by L Ruby Hannigan on July 12, 2019
The life of Kay Summersby changed dramatically that fateful day she became a driver for General Dwight D. Eisenhower in London, 1942. Kay worked with The Motor Transport Corps and was assigned to drive the American General around the war-torn [...]

by L Ruby Hannigan on June 27, 2019
This is a complex novel written about the heart-breaking loss of Palestinian people; a loss of home and country. Julie was the daughter of a Palestinian-Armenian woman named Ivana. Ivana fell in love with a British doctor she met in Palestine. [...]

by L Ruby Hannigan on May 31, 2019
This historical mystery involves famous writers Byron, Shelley, Mary Shelley, and her stepsister Claire Clairmont. The story is told by Clair, the last surviving person in this small group of writers, as she tries her best to keep afloat until [...]
Submit Your Book