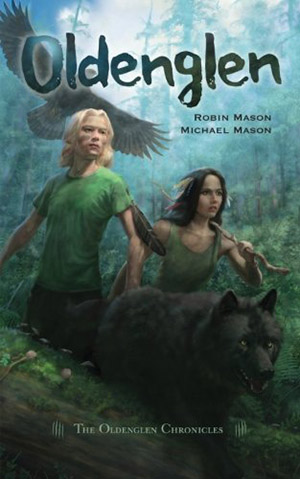 Jackson or Jax Wolfe is not having the greatest start to his summer. He and his family have just moved from England to a house in the woods in Oregon. Feeling a bit lost and more than a little bored, Jax begins to explore the woods and the glen. He soon discovers that there is a magic in the woods – the animals can talk to him. Once he gets over his surprise, Jax relishes spending time with his new woodland friends. Things get even better when Sarah – the granddaughter of the owner of the land – comes to stay for the summer. She, too, can hear the animals and they become fast friends over their love of the woods and its residents. Trouble is brewing, however, when Sarah’s grandfather proceeds with his plans to build a housing development in the glen, destroying it forever. Jax and Sarah must find a way to save the glen and its animals before it’s too late.

Oldenglen, written by father-son team Robin and Michael Mason, is a delightful debut novel for children. The authors have created a lovely world in the book which centers around the glade in the woods. It is the meeting place for the animals in the book and considered the heart of the woods. The animal characters are delightful and funny (the names alone should produce more than one giggle out of the reader). They each have their own personalities and quirks and come off as fully realized characters. Jax is a solid hero – affable, smart, courageous, and a bit cheeky. His character arc is well done and as his love for the glen grows, so does his determination to protect it from danger. Sarah is a great sidekick for Jax as she brings a sense of calm and heart to the book. She is not afraid to challenge people – including her grandfather – for what she believes is right. The adult characters are a little less fleshed out, but also add to the book and plot points. The plot unfolds at a nice pace with no lag. The authors build up a nice sense of foreboding throughout the book when danger encroaches upon the glen. Overall, Oldenglen is a highly enjoyable and satisfying book for children of reading age.