Paris Nights: My Year at the Moulin Rouge by Cliff Simon with Loren Stephens 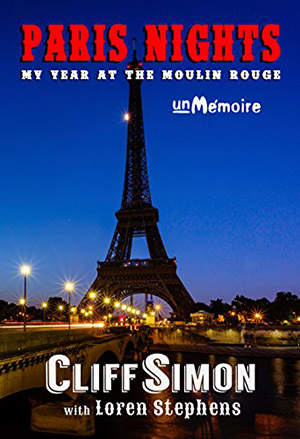 Whether or not readers recognize Cliff Simon from his various roles as villains on TV shows – and most notably as the evil Ba’al in Stargate SG1 – his memoir Paris Nights: My Year at the Moulin Rouge will entice readers with nineteen short chapters of one man’s incredible journey from fighting in South Africa’s Air Force during the apartheid to starring in Hollywood. As the title suggests, Simon’s memoir focuses on the year he spent in France dancing at the Moulin Rouge from 1988 to 1989.

Through Simon’s crisp, clear prose, the 1980s Parisian nightlife is cast in brilliant relief before the reader’s eyes. The costumes, grueling dance routines, casual sex, and dangerous temptations would suit a Hollywood movie, but this is a rare backstage pass to the world-renowned cabaret and a particular era of the city of love. This is a treasure for any Francophile. Simon never dwells long on any particular event, and his memoir moves at the efficient clip of a well-choreographed performance.

“There is a rhythm and a pulse to the city, and nowhere did I feel it more acutely than performing on the stage of the Moulin Rouge with its electric energy.”

In the backdrop, before and after Moulin Rouge, are South Africa and the apartheid. While politics are not the primary focus, everyone is shaped by his or her political climate. Simon touches on some complexities, which have both individual and global effects for the reader to consider. Ultimately, this is a coming-of-age memoir. Within minutes of greeting her son at the airport, Simon’s mother deduces his maturation during his sojourn in Paris.

While the book includes over 30 pages of photos, these are primarily of Simon rather than of Paris. Simon’s Parisian adventures are inlaid within his greater life journey that, while not the emphasis, makes his memoir even more compelling and inspiring. Intentional or not, Simon’s memoir Paris Nights: My Year at the Moulin Rouge relays a firsthand account of significant historical and social benefit. This memoir should appeal to anyone interested in dance, theater, Paris, the 1980s, the apartheid, or Hollywood actors.