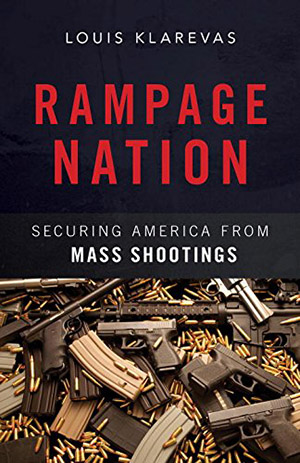 Sandy Hook, Fort Hood, Aurora, Orlando, and dozens more mass shootings have occurred in the recent past and the future doesn’t seem to be any brighter. What are the factors that go into a mass shooting and could the shootings be stopped, given the will to do so.

Dr. Klarevas provides descriptions of some of the attacks, beginnings with the deadly six minutes at Sandy Hook Elementary School. It is truly frightening. There are other examples that mainly illustrate the bookends of the trinity: perpetrators and guns. The places are tied into the first, the perpetrator, and are coincidental. The death tolls are closely affected by the types of weaponry used. The author presents a thorough evaluation of weaponry, historically and for the present, with an assessment of lethality.

As for what is to be done, the author offers ways to break the trinity. The three ways are: dissuade the perpetrator, defend the target, or deny the weapon.

The perpetrators (I’m purposely avoiding the term ‘shooter’) usually show signs or have been contacted by law enforcement. Often these signs are missed due to the low level of the offenses or, perhaps, a felony plea-bargained down to a misdemeanor, thus avoiding the denial of gun ownership. The solutions include changing the classes of crimes subject to the bans, and, a novel solution being tried in California gun courts. As with drug courts, gun courts would handle lower level violators and situations involving guns. This could enhance the identification of possible threats and lead to denial of weapons to more unstable people.

People and places are difficult to deal with. Obviously, denial of the weapons, primarily semi-automatic guns with large capacity magazines would, without the interference of the National Rifle Association and the congress, be the easiest and most certain remedy.

The author presents the experience of Britain’s’ and secondly Australia’s experience with the buyback/banning of first semiautomatic long guns and then pistols. Since the bans, there have been no homegrown gun massacres and the level of suicides and other gun violence have tapered off as well. Can it work here? I doubt we’ll see in my lifetime but, a journey of a thousand miles….

As with any review, I’ve just scratched the surface of what’s in the book. I hope it will be read and used as a resource in the fight against gun violence. It’s an excellent work.