Relic: How Our Constitution Undermines Effective Government–and Why We Need a More Powerful Presidency by William G. Howell and Terry M. Moe 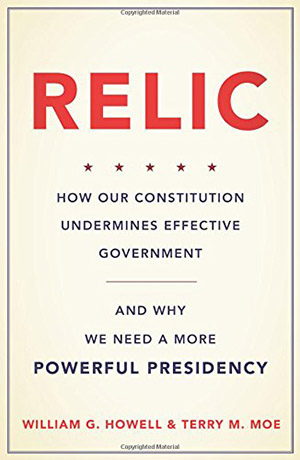 Most Americans are not very happy with the way Washington D.C. operates. Any satisfaction comes in small doses: Well, “we stopped that” or “well, we squeaked that one by.” Hardly ever do we feel that the Government has worked smoothly to achieve a needed goal. Why can’t the three parts of government ever work together in harmony? Kumbaya.

According to the authors, it’s because the Constitution is designed that way. The founders were suspicious of human nature and its tendency to gather as much power as possible. That is why they divided the government into the Legislative, Executive and Judicial branches with more or less equal powers. Perhaps it’s working too well for today’s complicated world, where problems arise quickly and need to be dealt with swiftly.

The Constitution was written for a very different time. The country was smaller, less complicated, and there were twenty-six Senators and 65 House members. As of now, there are one hundred Senators and 535 Representatives with at least as many opinions and interests. The main word the authors use to describe these members is parochial. As long as these parochial interests take precedence over national interests, agreements will take extended debate and any law that does get passed will be watered down and very well may be ineffective and/or inadequate to its purpose.

By way of contrast, they think the President, elected by the entire country, has a view of the nation’s interests unfettered by the narrow view. Also s/He is more concerned about their legacy than a mere legislator. In brief, “such is the promise, all too rarely fulfilled, of presidential leadership.” The authors are not Pollyannas.

The author’s solution is one constitutional amendment that would give the President fast track authority over whatever legislation he brings forward, giving him the opportunity to more easily set the agenda and so achieve effective laws that benefit the entire nation instead of oh, say, Texas?

The authors make a good case. Of course, it’s not likely to happen as long as the water flows and the grass grows, but they’ve made a persuasive and tantalizing argument. To bolster that argument, the last quote on page 178 is from Thomas Jefferson, one of the most influential personalities of the time. He was abroad when the Constitution was written, but his ideas were influential with those who wrote it. In this one case, I would suggest reading the last page first.