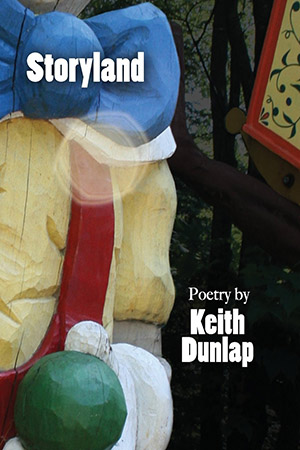 In “Greatly Exaggerated,” a review of H.L. Hix’s book Morte d’Author: An Autopsy, the late David Foster Wallace discussed the literary fall-out after Roland Barthes declared the “death of the author.” Barthes (among other Derridean deconstructionists) had argued against the practice of invoking the notion of an author in distilling any meaning from a literary work. After introducing this complicated literary/philosophical issue, Wallace engages the argument, defending the “life” of the author. He explains that, “for those of us civilians who know in our gut that writing is an act of communication between one human being and another, the whole question seems sort of arcane.”

One cannot but consider the notion of Keith Dunlap when engaging his collection of poems in Storyland. Dunlap includes a brief bio at the end, in which he mentions having obtained his undergraduate degree in English in 1987 from Columbia College, a Masters of Philosophy in Classical Literature and Philology from Columbia University in 1992, and a Masters of Fine Arts from the University of Montana in 2000. Also mentioned is Dunlap’s former positions as co-editor of The Columbia Review and Cutbank. Finally noted is his foray as a musician and the stage, having played drums in several bands in New York and been a member of The New York Art Theatre Institute. Such a rich background cannot but inform Dunlap’s poetry, but what is most glaring by its absence is the fact that Dunlap not only has a law degree (Washington & Lee University School of Law, 2007), but was a practicing attorney for seven years, specializing primarily in business litigation (he still maintains his law license in the state of Maine). Dunlap himself has acknowledged this unhappy time and that – while successful – he was not “the guy for that job.” In spite of (or, Dunlap may believe, because of) this unhappy time Dunlap started writing a great deal of poetry. Narrative, complexity constructed of simple images and metaphor, musically deft.

Most, if not all of Dunlap’s poems seem straightforward, but are usually about something other than the surface narrative. In “Harry Shunk,” he discusses Yves Klein’s photo entitled Saut Dans le Vide as a reminder that the uncertainty representative of photo is what makes the world alive (not mentioned is the translation of the photo’s title, “Leap into the Void”).

Dunlap has stated that he would never consciously sit down with the intended purpose of writing a poem; that they would often come to him in a moment’s reflection. His poem “The Last Poem I’ll Ever Write” is illustrative of this practice:

“Every time I write a poem I’m sure
that it’s the last, but then
I wander down an ordinary street
and look around
and see the strangeness of the narrow doors
and curtains drawn, the floating sound of music
from an upper room snowing down,
a dog who wanders out from in between
two buildings, all old familiars
of my nervous disposition,
all full of everything and empty too,
and there’s really not much else
that I know how to do.”

The title poem, “Storyland” deftly invites the reader to join him in his life, and his thought process (Dunlap notes in his poem “The Invitation” that the word invitation is from the Latin, invitare, to join life).

Dunlap’s wonderful use of language and theme to draw a precise and moving human situation is seen throughout each of his poems, such as in “Prisoners of Love”: “There is no station, only a parking lot/next to an underused laundromat/where two men sit idly smoking” “She has seen it happen/faces bright with fake surprise” “how little anyone cares/whether she has a reason to delay” “stranded in the seething daylight” “as if her problem were someone else’s….”

That most of Dunlap’s poems are self-reflective is evident throughout. His educational background and his insatiable appetite for reading (especially the classics) clearly provided him the tools. The application of these tools juxtaposed with, and filtered by the contingencies of life (e.g., the meat grinder that is law school and the legal profession) often manifested in an esotericism in his poetry that some who choose to remain on the surface may find disconcerting. Yet, craft should be invisible in poetry. Sound (rhyme, meter, etc.) should move the reader through the poem without the discomfort of formality. Dunlap’s deft use of language does just that.