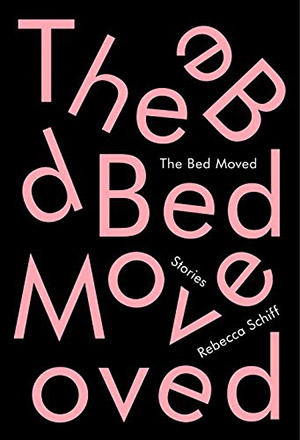 The Bed Moved: Stories by Rebecca Schiff is a collection of twenty-three short stories focusing on relationships, family, sex, and death. The stories all vary in length, the longest being thirteen pages and the shortest only a mere half a page. The topics of the stories range from the humorous – petty feuds between neighbors over residential changes, being unable to break up with someone on their birthday, a service to replace any and all body parts in order to receive better ratings – to the somber and sad – the death of a father, short lived relationships, being the other woman. Schiff provides commentary on the process of losing one’s father to death, the intimacy or lack thereof in modern day dating and casual sex, and the scrutiny women face in their appearances, sexuality, careers, and lifestyles.

The first half of The Bed Moved is a whole lot of fun. It kicks off with a short story that shares its name with the title of the book, questioning, “Is this what women are like now?” In this first story, Schiff writes how modern day women are more likely to sleep around, using the image of a bed to signify all the lovers the narrator has encountered. This story has such fine, strong language; vague, but packing one hell of a punch. It serves as a great kick-off of the book, and many of the following stories feel the same as well.

The stories stay entertaining, with plenty of humor and irony in tow. There’s good social commentary to be found in stories like “Men Against Violence,” “Lucky Lady,” “Not that Sad,” and others. Much like in the opening story, beds stay consistent in their useful imagery throughout the text, whether it’s a bed that’s seen a one night stand, a bed that’s present for the crumbling of a relationship, a childhood bed used to escape from the secret kept by a deceased father, or a bed where a girl experiences her first period. As stated in the short story “My Allergies,” “Bed is bed,” but Schiff is truly able to take the image of a bed and give it several different meanings – clearly a bed can sometimes be more than just a bed.

About halfway through The Bed Moved some of the stories begin to lose their luster. They all start to follow the premise of young women sleeping around with idiot men and making poor life choices, which is not to say that this makes for uninteresting subject matter or is unacceptable in any way, but after the tenth story or so of the same nature one might long for a change in plot. Also, several times a male character in a story is mentioned it comes out that he is bisexual. This would normally be a cause for celebration, as the bisexual community is so poorly represented in fiction, but the bisexuality of these men is played off as almost a negative characteristic. Schiff writes of her female protagonists’ untrust of bi men – how the women suspect them always of cheating and worry of getting AIDS from them. This is disappointing to find in a book filled with progressive short stories; it is a very generic stereotype of an entire sexuality that people should have moved on from by now.

Nonetheless, the writing in The Bed Moved stays strong throughout, and even when the repetitiveness of the stories takes hold there is still plenty of humor to be found. A fun read for anyone looking for quick, humorous stories on sex, death, and the uncertainty of life.