The Faith of Christopher Hitchens by Larry Alex Taunton 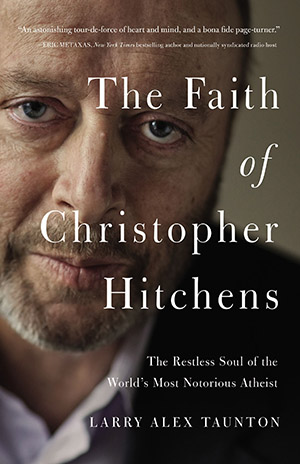 In his book, Larry Taunton relates his discussions with Christopher Hitchens during the last months before Hitchens’ death from esophageal cancer. Taunton, an evangelical Christian, “suggests” that Hitchens, a life-long atheist, converted to Christianity.

Of course the easy initial argument is that Taunton waited until after Hitchens’ death to write his little book so that Hitchens could not respond. Taunton has rejected any implications, but his credibility was ill served when he noted in the introduction his annoyance with Hitchens when the latter had aired an e-mail exchange between the two during one of Hitchens’ televised debates. Taunton winces that the revelation of the email conversation was “particularly jarring” to him as Taunton was mediating the debate and was “not in a position to respond.” Yet, he just did the same thing; Hitchens is forever denied that opportunity here.

Taunton has denied that Hitchens expressly “converted,” willing simply to taunt readers into buying his book to determine for themselves. Yet, only those who truly knew Hitchens would be in any position to make such a determination. And, indeed, more pages have been filled discussing whether Hitchens actually “converted” to belief than what filled Taunton’s short work. However, no one seems to have challenged the way Taunton cleverly framed his argument to direct readers to focus solely on that question.

In her article, “Persuasion and Linguistics: Framing an Argument” (in Persuasion: The Essence of Diplomacy, 2013), Biljana Scott analyzes those framing devices which appeal primarily to the power of reason, from assertion to typecasting and semantic categories. She also considers the appeal to emotion, and the hand-in-glove relationship between reason and emotion.

Scott observed that the way in which we frame an issue largely determines how that issue will be understood and acted upon. A frame is a thought organizer, highlighting certain events and facts as important and rendering others invisible. That is the power of framing. By consciously and cleverly framing the terms used in the debate, one defines the debate itself and limits the scope of attention to those chosen terms.

In Taunton’s book, the framing begins with the book’s subtitle: “The Restless Soul of the World’s Most Notorious Atheist.” Taunton has immediately assumed that Hitchens’ soul was spiritually restless and in need of stability. Hitchens is not simply an atheist (which Taunton never rests from connoting as evil itself), but a “notorious” atheist. The term “notorious” generally means famous or well known, typically for some bad quality or deed. Without even opening the book, then, we are led to understand Hitchens to be an evil person desperately in need of help but beyond redemption. This overtly presumptuous message is confirmed in the prologue when Taunton claims that “[m]ost of us have someone like Christopher Hitchens in our lives; someone we love who is so hell-bent on self-destruction that we feel powerless to help them.”

Taunton peppers each section with a selection of quotations that similarly reveals his utter lack of objectivity, such as his quotation of John Le Carré’s that “[t]he fanatic is always concealing a secret doubt” (see also his quote from Karl Popper, intentionally taken grossly out of context as well as his display of ignorance regarding the writing of George Orwell).

Taunton’s stated objective was not to “recount [Hitchens’] life, but to give some account for his soul”, a remarkably presumptuous statement made by someone who had known Hitchens for just a few years. His discussion of how Hitchens “became” an atheist is equally presumptuous. Taunton implies atheism shouldn’t develop unless one has had religion associated with violent trauma (hence his discussion of Ayaan Hirsi Ali’s rejection of Islam because of torture from “Islamic extremists;” of course, Taunton’s only example is from the Islamic religion). Taunton seems perplexed at the notion that a rejection of religion could ever come from simple quiet reflection.

Taunton continues the epistemological oppression by the selective use of key labels, such as characterizing Hitchens’ teenage rejection of religion as “rebellion” and characterizing such behavior as an individual’s need for self-justification, which behavior is clearly “dangerous” and evident in the creation of so many of the world’s “tyrants.” Particularly egregious is Taunton’s claim about “[r]esearch” indicating that “ages fourteen to seventeen are often decisive years in the ideological development of children.” What is egregious is not the statement itself, but the footnote to the statement in which the “research” he cites is his own article, “Listening to Young Atheists: Lessons for a Stronger Christianity,” published in The Atlantic Monthly in 2013. In the article, Taunton simply relates his discussions with a few teenagers, but references no professional research at all.

Taunton uses this framing methodology throughout the book. He considers Hitchens to be “contradictory” when Hitchens takes positions on issues that do not conform to what Taunton believes Hitchens “should” believe, given his “amoral” nature. Inconceivable to Taunton is the possibility that anyone, specifically Hitchens, could approach any issue independently and objectively, refusing to be labeled and refusing to conform oneself to any particular ideology. Taunton himself notes that Hitchens was not an ideologue.

Of course, the highlight (for Taunton) is his discussion of the train ride the two shared shortly before Hitchens’ death, during which the two discussed the Book of John from the Bible. Despite Hitchens’ repeated expressions throughout his life regarding his critical-literary interest in many of the Bible’s stories, Taunton claims it to be evidence of Hitchens’ leaning toward conversion, claiming, with no evidence, that “Christopher had demonstrated a willingness to entertain the possibility, if only theoretically, to convert to Christianity.”

Relying on his own myopic worldview and his lack of a true knowing of Hitchens, Taunton interprets every sigh, every facial gesture during their train ride discussion as “evidence” of Hitchens’ restlessness and “acquiescence” to the “Truth.” In a particularly cruel move, Taunton relates Hitchens’ reaction to Taunton’s discussion of Hitchens’ beloved children and their feelings toward their fathers’ impending death, somehow equating Hitchens’ understandable discomfort and sadness with being a crisis of spirituality.

Given the way Taunton has framed his discussion, is there any other interpretation to be made but that Hitchens, like Augustine, realized his life was guided by evil thoughts and that he needed to, and ultimately did, convert to a Christian belief system (as defined by Taunton)? Taunton surely succeeded in creating propaganda for consumption by members of his Fixed Point Foundation, whose mission “is to defend and proclaim the Gospel in the secular marketplace and equip others to do the same.” Taunton failed, however, to create an objective discussion of Christopher Hitchens. Tragically, we can only guess how Hitchens would have responded.