The Orphan Keeper by Camron Wright 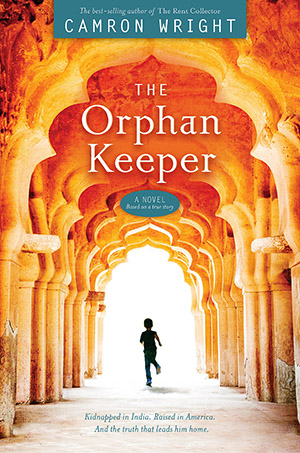 A disobedient son finds his young life drastically changed when he is kidnapped right off the street in his village in India. Taken on a long drive, he is sold to The Lincoln Home for Homeless Children. Desperate to find him, his family hands out pictures of the boy named Chellomutho to everyone they meet. While he is at The Lincoln Home, Chellomutho tries to tell all the adults there that he is not an orphan and has a family that loves him and will miss him. The people at the orphanage are nice, but seem to not listen. They clean him up, give him new clothes and shoes and most important of all, give him plenty of food to eat. He is told that he will have a wonderful new life in America. Soon, he finds himself in a foreign land and hears a foreign language spoken. Fortunately for him, his new family enfolds him into their lives. His name is changed early on when his new family learns that he is being teased and bullied at his new school. They help him choose a new name and Chellomutho becomes Taj Kyber Rowland. He learns quickly to enjoy the American life he is living. After high school graduation he goes to London to study abroad and ends up boarding with a family who were all born in India. Their home and the foods they eat slowly awaken memories for Taj of his long-lost birth family and he begins his quest of reconnecting with his them.

The Orphan Keeper is truly a remarkable story of one young man’s journey to discover his past. Taj is a determined young man who followed through with his dreams. Camron Wright’s fascinating novel is actually based on a true story, which makes it all the more powerful. Included in this book is a list of discussion questions aimed at reading groups, designed to help readers think a bit deeper on various points raised in the book. A surprising inclusion are a collection of personal photographs of the young man the story was based on as he chronicles his process of reconnecting with his biological family. Interested readers will appreciate learning a bit about Indian culture and will walk away from the book with the realization that it’s a small world after all.