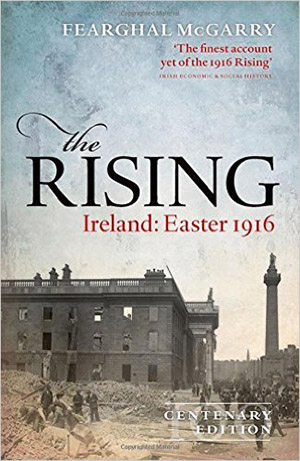 The Rising reviews one of the seminal events (if only symbolically so) in Irish history. The Easter Rising of 1916 not only destroyed much of the center of Dublin – it changed the course of Irish history. But why did it happen? What was the role of ordinary people in this extraordinary event? What motivated them and what were their aims? These basic questions continue to divide historians of modern Ireland. The Rising is the story of Easter 1916 from the perspective of those who made it, focusing on the experiences of rank and file revolutionaries. Fearghal McGarry makes use of a unique source that has only recently seen the light of day – a collection of over 1,700 eye-witness statements detailing the political activities of members of Sinn Fein and militant groups such as the Irish Republican Brotherhood.

This collection represents one of the richest and most comprehensive oral history archives devoted to any modern revolution, providing new insights on almost every aspect of this seminal period. The Rising shows how people from ordinary backgrounds became politicized and involved in the struggle for Irish independence. McGarry illuminates their motives, concerns, and aspirations, highlighting the importance of the Great War as a catalyst for the uprising. He concludes by exploring the Rising’s revolutionary aftermath, which in time saw the creation of the independent Irish state we see today.

For the Irish insurgents of 1916, it was a fear of cultural obliteration by the forces of the metropolis that drove people into rebellion. Yet, there was no firm conception that the rebels had a real chance of military victory – the arms were too few, the planning too shoddy. Rather, McGarry writes, it was a kind of armed propaganda and in this respect, it worked. The Rising was an act of desperation, by elements of the Irish Republican Brotherhood and the Volunteers to rescue their movement from irrelevance. Only by bold, armed action could their understanding of “Irish Freedom” be resurrected. Only by creating a new national identity through armed confrontation could the sense of shame created by the collapse of indigenous culture be erased. The foundation of this idea of “Irishness” is perhaps the enduring legacy of the Rising.

On other facets of the rebels’ motivations, McGarry records little that one would not expect. The ordinary Volunteers felt they were going to “strike a blow for the freedom of Ireland” and thought little beyond that. Ideologies such as socialism, he writes, despite the participation of James Connolly’s Citizen Army, were not prominent in the inspiration or radicalization of the rank and file. Similarly, the ideology of Republicanism was established only after the Rising as the goal of Irish separatism.

McGarry’s work exemplifies one of the developments in the study of history of the past half century, that being the emergence of oral history as a distinct academic field. Distinguished from oral history, oral tradition was regarded mainly as the academic domain of folklorists and as such was incorporated in the academic discipline of Folklore Studies from the 19th century onwards. Since the 1950s, historians of Africa studied oral traditions in an attempt to write pre-colonial history.

Ireland is internationally acclaimed for its rich oral tradition, expressed eloquently in Irish folklore and its influences on the Irish literary tradition, and yet oral history is generally neglected in modern Irish historical work. The oral tradition in general presented many methodological problems to the historians.

Among the problems many historians have had with oral history is the trustworthiness of oral sources as problems of unreliability and validity arise, mainly because the oral accounts are not contemporaneous to the historical event (since they are collected at a later date). Historians are often suspicious of the way subjectivity may lead them into the unknown backwaters of psychoanalysis, mixing scientific rationality with irrationality, rendering history personal and irregular.

Since oral history material is collected from individuals, it often brings the individual experience and biography onto the center stage (contrary to prevailing historiographical trends). However, orality does not take place in a social vacuum. As oral historian Samuel Schrager has pointed out, transmission and reception processes link personal accounts to a collective, community-based experience (often implicit in the way a narrator may alternate between the usage of first person singular “I” and first person plural “We”): Intangibility of reference in these selves, groups and events reach out to listeners, inviting them to interpret what they are hearing broadly or narrowly as they wish. Therefore, the empathy which oral history enables with the past is not only empathy with an individual experience, but also empathy with a social context.

Politics may have obstructed oral history development in Ireland. Irish history has always been open to political manipulation. Oral traditions are often a vehicle of partisan political consciousness and therefore shunned by truth-seeking historians. On the other hand, contemporary historians face reluctance of people to disclose alternative oral narratives of recent contentious, highly politicized historical episodes (i.e. the War of Independence or the Civil War). These social taboos are sometimes weakened as time passes and hegemonic, often nationalist, ideologies recede. Recently there has been a renewed interest in the Irish Revolutionary period and Irish participation in World War I, involving innovative research. Thanks to pioneer attempts to incorporate oral history, marginalized and suppressed voices from the past are now being given a stage.

Another critical issue is vernacular language. Oral historical traditions in folklore often require a knowledge of Irish. However, history based on official archival documents in English has obviated the necessity for fluency in Irish and so rendered many oral sources out of reach.

The conservatism of Irish academia in general is a major factor. Although interdisciplinary research has become a leading academic direction since the 1960s, Irish studies continue to uphold rigid disciplinary boundaries. Therefore, the cooperation required between folklore, history and social sciences in order to develop oral history research is limited.

McGarry himself observed that the statements reviewed represent a heavily mediated form of oral history, recording those aspects of the past that interviewees were able or willing to recall, reflected through the lens of a state-sponsored historical project. And yet, what is thought to have happened could be considered more significant than what actually occurred, while, for those who study historical memory, the selective nature of oral testimony – its distortions, confusions, and omissions – is more valuable than it accuracy.

McGarry’s aim has been to use the unique source to allow those who fought for a new Ireland to tell their story in their own words. While the witness statements do not, for the most part, fundamentally alter our knowledge of what occurred, they enhance our understanding of the motivations, mentality, and experiences of the revolutionary generation, preserving something of the texture and complexity of the past rarely recorded by conventional sources.