The Sun in Your Eyes by Deborah Shapiro 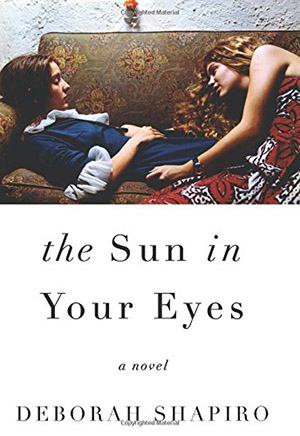 The Sun in Your Eyes by Deborah Shapiro is an aptly named novel. The book reads as though you’ve stepped into the sunlight, feeling warm, contented, only to be blinded by the bright light. Once your eyes have adjusted, you feel disoriented, unsure of where you are and where you are going. The novel is, at first, impressive and engaging, but as the story continues Shapiro loses steam and the momentum wanes. As a reader, I was drawn in by the captivating female friendship but was lost by the static of the clichéd story.

The premise of Shapiro’s debut is simple: a woman is in search of answers about the death of her rock star father. She enlists help from an old college roommate and begins the tedious task of unveiling the mysterious truth about her father and his cohort. Together Lee and Viv discover their own selves again as they travel across New England and the country to find what they are looking for.

Character development is pulled from the several different perspectives that narrate the novel. We get a younger version of Lee, an of-the-moment Viv, an of-the-moment, Lee, and Lee’s mother, Linda. Through each perspective readers toggle back and forth between the past and the present, learning that the families of rock stars shine bright like diamonds and their peers, drawn into the glowing orbit, are often trapped by the glow. Viv admires Lee, Lee appreciates Viv and the story moves rapidly between their infatuation with themselves. Selfishness is a stark theme of the novel.

The Sun in Your Eyes is cultural, timely, and it’s varied in its approach to capture female friendship and the irregularities of mother/daughter relationships. While Shapiro’s wit and writing draws the reader into what feels like a classic story, she runs ragged with the ending, causing a divide from Viv’s lush narrative to Lee’s worn out saga. While the novel started off strong, it was hard to make it to the end.

Overall, it’s a novel with real promise. I enjoyed Shapiro’s writing, her wit, and her attempt and showing a side of old friendships, splitting and breaking while maintaining semblance of nostalgia. But I was tired by the time I finished the novel, finding that it dragged on in a way that dimmed its original light.