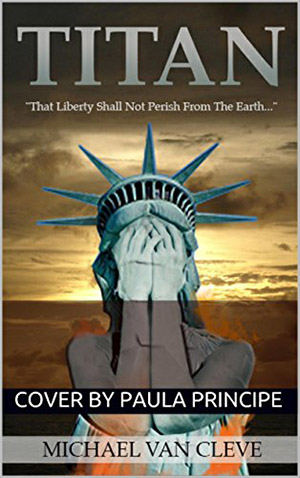 Michael Van Cleve’s Titan is, at its core, a story about a family searching for a safe place in a dystopian future heavily altered by nuclear fallout following the destruction of civilization as we know it. Paris, the matriarch of the family, heads off to go confront the last remaining society that is free from the radiation’s effects. This closed society is highly aggressive to anyone seeking entry, but Paris and her husband, Troy, have a plan. Is the danger the family faces to gain entry worth the price, and is life inside the city actually better than the life they already had?

Despite the seemingly interesting premise, Titan starts off rocky and immediately gets worse from there. The major thing holding back the story is the writing itself, which is full of poor grammar and uncomfortably choppy sentences. For example:

“Christopher walks around with his yo-yo. It’s a shiny red, Duncan yo-yo. Christopher has become quite adept with it. He manipulates the yo-yo like a pro. If you saw him, you would believe he was a street performer.”

This style fills up the bulk of the book, and the trend to occasionally pop in with nuggets of “if you were there” sections immediately pull readers out of the narrative, if they were able to get into it in the first place. Dialogue sections are slightly better, but dialogue sections are few and far between.

The quoted dialogue above also brings up another problem, that of time. The events in the book clearly take place after a nuclear war occurred, but exactly how long is hard to fathom. There was supposedly a nuclear winter for a hundred years, and yet descriptions of things like the Duncan yo-yo that supposedly works just fine, hamburgers that Paris finds frozen in a freezer that was still working (and the food somehow didn’t kill her), Diet Coke that still has the same compounds now as it originally did when canned, and people are still wearing manufactured clothing. Then there’s Solomon. Solomon is something of a passion project for Troy – who is apparently a genius in multiple fields of science, technology, and the arts – and is an attempt at a true AI. Without spoiling anything, Solomon opens up a bunch of plot holes later in the book – how he was able to manifest so far away from where Troy built him, despite there not being any sort of global internet after the fallout being just one of them.

Characters in Titan are flat, and impossible to care for. Many of them are not given names and are instead referred to by titles such as “Young Girl” or “Sick Woman.” Due to the writing they mostly end up being nothing more than stereotypes. The setting is sparsely described, and only really limps along due to the plethora of already existing dystopian novels that have prepared readers for the last decade or two. The book attempts to touch on darker and more mature subjects, but due to the poor characters and shoddy descriptors repeatedly fails to get across any sort of emotional response from the reader. Titan is short, clocking in at around 88 pages. The book doesn’t offer anything new to the genre, and despite trying to set up a sequel, is unlikely to have many readers who will wade through more than just a few pages.