Your Favorite Band is Killing Me: What Pop Music Rivalries Reveal About The Meaning of Life by Steven Hyden 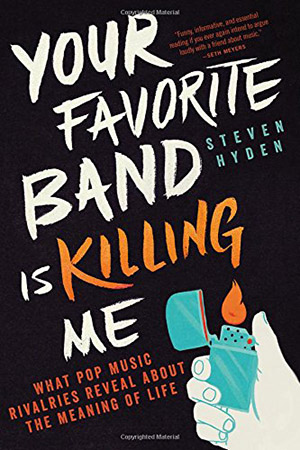 Author Steven Hyden sets up a series of rivalries between sixteen bands or artists. Some of the rivalries are direct antipathies between such artists as Roger Waters and the other band members of Pink Floyd, the Beatles and the Rolling Stones, or Madonna and Cindy Lauper. Others are not so much antagonistic rivalries but cases of one band influencing another, like Nirvana and Pearl Jam.

All of this is filtered through the sensibility of a reasonably fanatic rock critic and music fan, and how these artists fit into his own life. The inevitable problem is that readers will react according to their own lives, obsessions, and prejudices, which may or may not coincide with those of the author. For those who are, like the author obsessed with pop rivalries, the Kanye West-Taylor Swift “rivalry” continues with the recent alleged “permission” granted by Swift, for Kanye to write and record a song that mildly trashes her. So some of the rivalries Hyden outlines seem to be continuous, if not necessarily representative of any particular reality.

Sometimes the author’s opinions seem to override the factual. For example, he states that Madonna’s music has endured over that of Cyndi Lauper, because she had “better songs, and more of them.” This entirely ignores Lauper’s current big hit Broadway musical Kinky Boots, a show where she wrote both the lyrics and melodies, something that neither Paul Simon, Sting, nor Bono and The Edge were able to successfully pull off. Similarly the reader may or may not care that the author basically prefers the Stones to the Beatles.

By and large, the book reads easily. The casual reader may get tired of constant references to dinosaur-era TV shows, obscure movies, and repeated details about the author’s life, but it would seem that the very point of the book is to get the reader to pick sides with or against the author. I particularly enjoyed the odyssey of Lynyrd Skyrd vs. Neil Young, where the author asserts that in fact Ronnie Van Zant, author Sweet Home Alabama, was actually a registered democrat who campaigned for Jimmy Carter, but after his death when his brother Johnny took over the band, it became essentially more like the sort of an anti-hippie band. This was the way most of their fans had responded to Ronnie’s song, but not what he had actually intended. If you like pop music rivalries, and follow them fairly closely, you will enjoy this book.