A Killer Ball at Honeychurch Hall by Hannah Dennison 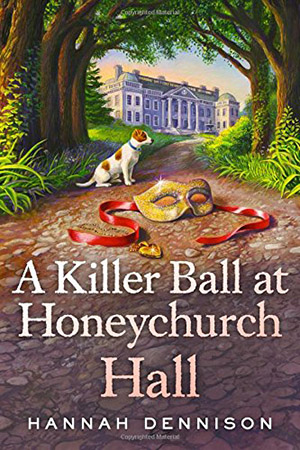 Kat finds herself in the middle of long ago murder when she falls into a secret room at Honeychurch Hall. As an antique dealer, Kat had been looking at two pictures when she leaned on the wall and tumbled into the secret room. She learns very quickly that her own mother is one of the suspects in this case, which in itself does not surprise Kat. Her mother has always been somewhat sketchy about her past and she leads a very unbridled lifestyle. Lurking around the castle grounds is a man from the past, Brian Laney. An old admirer of Kat’s mother, his feelings were never reciprocated, as far as Kat knows. She finds herself wondering if her mother is as innocent as she proclaims. Kat realizes that her mother’s past is filled with many shades of grey! Murder, mystery, and long hidden secrets catch up with everyone at the Hall as the investigation unravels the truths.

A modern day Upstairs, Downstairs, or even Downtown Abbey novel, Hannah Dennison has written a fast and funny murder mystery. Secret hiding places, stables, MINI Coopers, and iPhones complete the story to make it modern as its setting is in the English countryside. This novel is the third in the series, but the reader can enjoy it on its own merits. The characters all have complicated pasts that may bring more stories to the series. The character of Kat is the most sensible and reliable person in this series. With all her faults, the reader will hope good things come her way. This is a very enjoyable read for a rainy afternoon!