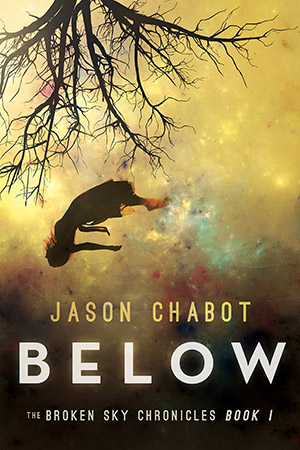 “Every pair of ears within these walls had heard the same whispered advice: Work as though you are already dead. Try to feel nothing.”

Elia works in the laundry of the Mirrored Palace, servant to the Twin Emperors, on one of the many floating islands of Above. Her goal in life – one that she despairs of ever achieving – is to learn from her mother how to stitch well enough that she will be promoted to seamstress. Everything changes when she finds a bone tied with a blue ribbon in her laundry. Unwillingly, she is pulled into an intrigue that she doesn’t understand, one with the potential to upset the current balance of power.

Hokk lives on the barren plains of Below, exiled from his city, hunger and madness are a constant near companion. His goal in life is to serve out his sentence and return to the city of Ago – a sentence that he has four years left to live through. When he finds a girl from Above, everything changes. He realizes that there is a danger that the leaders of the city of Ago must be told about, and maybe that information will win him an early forgiveness.

“He had made a commitment to himself six years ago […] that he would do whatever it took to ensure his survival, no matter the price.”

Two worlds, each for the most part ignorant of the other, collide when Hokk meets Elia. As they journey together they must decide if they can trust each other; each have their own goals, and each have their own secrets. Some of the secrets they protect are worth killing over….

Below is the first book of the Broken Sky Chronicles, a new YA series by Jason Chabot. The world is imaginative, with a post-apocalyptic vibe. The story never quite goes the way a reader might expect, and secrets uncovered during the course of the novel only lead to more secrets. The tone of the narrative skews a little toward the younger side of YA; there is death, but nothing graphic. The characters can be a little simple, written for the most part with one major personality quirk, and Elia goes from being a meek servant to a fiery independent woman with no transition. While the mystery/thriller aspect of the book is one of its best features, it is also one of its most frustrating: Below is filled with secrets and politics, and the readers will be kept in the dark about many, many things for most of the book – and end the book with very few answers, which may lead to some readers feeling like they have accomplished nothing with their time spent in Chabot’s world.

*Quotations from Below are taken from an Advanced Reader Copy and may vary from final published text.