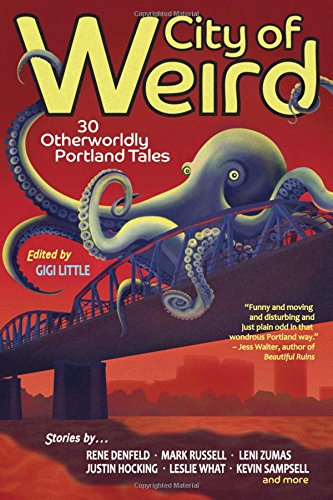 Portland cultivates its weirdness as both a shield to preserve individuality and eccentricity, and as a marketing slogan to pull investment and interest into the city. “Keep Portland Weird” appears on bumper stickers, buildings, and buttons. People invoke the slogan as a joke, as a talisman, or a mantra.

City of Weird, the new anthology from Forest Avenue Press, pulls from this tradition of seeking the weird, offering thirty stories that tap into the history and ambience of Portland. To say the stories are eclectic would be an understatement; story tone and style vary wildly, and subjects range from Santa and Krampus to sea life to the smell of books. All of the stories have really interesting ideas behind them, though many come across a little awkward, as if uncomfortable in their own weirdness. Some seem more thought experiment than actual story, ending as soon they’ve begun, with little or no character development. In many ways, City of Weird is akin to watching an episode of Portlandia: a lot of lukewarm entertainment punctuated by occasional moments of transcendence. The anthology is also hampered by a strange and seemingly arbitrary category system. Stories are split into eight subsections, such as “To the Dogs” or “Into the Weird.” None of the categories seem to especially tie into the overall theme of Portland’s weirdness, and a more inviting organizational method would have tried to capitalize on the culture of Portland for its subject matter.

Some of the best stories: an almost wordless comic by Jonathan Hill that gives a very Portland take on the reasons for alien invasion; a story by Jeff Johnson that embodies the weirdness of Portland in a kind of fairyland alternate dimension; a story by Doug Chase that explores hauntings and homelessness; and a nostalgic folktale by Rene Denfeld. The Most Portland Story award goes to “Letters to the Oregonian in the Year 30,000 BC” by Mark Russell.