Eat It Up!: 150 Recipes to Use Every Bit and Enjoy Every Bite of the Food You Buy by Sheri Brooks Vinton 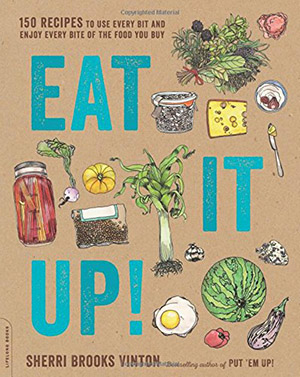 Successful cookbook author Sheri Brooks Vinton returns with Eat it Up, a cookbook that helps cooks make creative uses of food items they might otherwise throw away. Like Vinton’s other book, this book offers clear, no-nonsense advice, and in what is likely the most valuable part of the text, information on how to tell when food is safe to eat and when it should be thrown out. Vinton divides the book into 5 sections. The first provides the previously mentioned information justifying the use of unusual or unwanted items in the kitchen and giving information about when and how they’re safe to eat.

The second section, Nose-toTail Produce is by far the largest. This section primarily focuses on parts of fruits or vegetables that are typically discarded. The recipes in this section, like all of Vinton’s recipes, are technically sound, but some may be more useful than others in the real world. Apple cordial from apple peels sounds like a nice idea, but unless one is a fan of apple cocktails it may be of limited use.

The third section, The Whole Beast, offers suggestions on how to use off cuts and remains of meat cookery. Although again the recipes seem technically solid, the suggestions here are perhaps a bit less inspired than the rest of the book. Anyone who has grown up cooking in Grandma’s kitchen has likely seen most of these ideas before.

The fourth section, Pantry, gives uses for pantry staples such as bread, and condiments such as mustard and jam. The fifth and final section Upcycling, offers suggestions for repurposing prepared dishes. The recommendation for this book is for younger cooks who are just starting to experiment in the kitchen, and who maybe didn’t grow up cooking at Grandma’s elbow, seeing everything done the traditional way. That said, this book is worth a look for the cook who is looking to make their kitchen that little bit more environmentally friendly. Like Vinton’s previous Put ’em Up a book which deals with canning and preserving, Eat It Up arranges the recipes in alphabetical order so they are easy to find. Unfortunately, the use of different sections breaks up this obvious organization somewhat, making it slightly less user friendly than Vinton’s previous books.