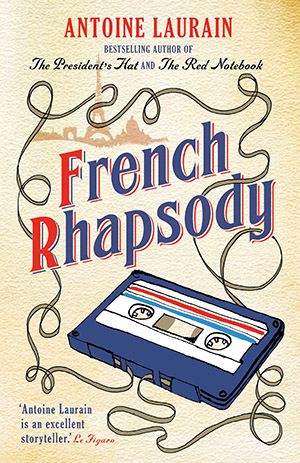 In French Rhapsody by Antoine Laurain, the postal service finally delivers an important letter to Dr. Alain Massoulier after 32 years. It’s an invitation for his band The Halograms to meet with the studio where they’d submitted their demo. Had they received the letter and gone to the meeting, perhaps they would have become a famous French rock band rather than disbanding and going separate directions. Massoulier reaches out to the other four band members to see if any of them still have a copy of the tape.

As with Patrick Modiano’s novels, Antoine Laurain’s French Rhapsody is a nostalgic exploration into what could have happened. Characters search for the life they once had or could have had by looking up old acquaintances, friends, and lovers. However, Laurain’s writings are more modern and whimsical than Modiano’s. Instead of remembering WWII, Laurain pokes fun at the hypocrisies and artifices in the modern art and political scenes.

The novel is primarily written in third person and from a male perspective, but once in awhile there’s a firsthand account from a female character to explain her actions. However, these chapters are unnecessary and detract from the overall flow of the novel.

Anyone who enjoyed Laurain’s previous novels The President’s Hat and The Red Notebook will doubtlessly enjoy this new romp.