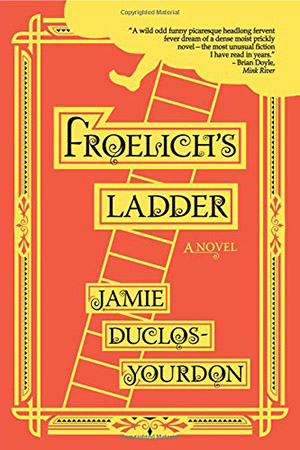 Froelich has been living up his impossibly tall ladder for as long as his nephews can remember, outright refusing to descend no matter what. His motivation is a decades-long grudge against his brother, who married the woman Froelich was obsessed enough with to build the ladder for, without her knowledge or request, in the first place. One day, however, his nephew Binx awakes to find his uncle missing, which he notices only because the ladder has been perched atop his back since the death of his father. Binx’s brother then sets off to locate Froelich and bring him home. Various misadventures ensue.

Froelich’s Ladder is not a gripping read, but it has plenty of charm. This whimsical tall tale boasts an interesting cast of characters whose lives and agendas intersect to lend depth to a very unusual story, itself a blend of historical fiction, peculiarity, and fantasy. Loneliness and a need for connection are explored throughout, but perhaps because most of the characters are fairly active, these matters create more of a sense of hope for the future than heaviness.

The tone can be a little uneven at times, and this issue isn’t quite helped by the cover, which seems to alert the reader to a fun story potentially suitable for children, when in fact it contains the occasional threat of rape or actual murder, sprung seemingly out of nowhere. Such scenes may exist to deepen our sense of concern for the characters’ safety or to remain true to the dangers of the time, but considering what the design choices appear to promise and the predominant tonal context, they’re a bit jarring nonetheless.

In short, if you’re looking for an adult story about an old-timey Pacific Northwest that’s layered and whimsical and occasionally fantastical – and you can overlook some abrupt bursts of not-so-fun danger – this could be a perfectly suitable choice for your next read.