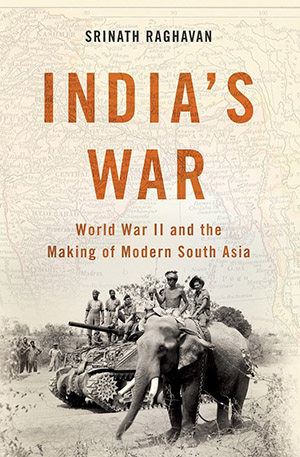 India’s War: World War II and the Making of Modern South Asia, is a weighty but very readable study of India’s role in World War II on virtually all fronts. When the war broke out in 1939, India (as a colony of the British, ‘the Raj’) was ill-prepared to fight. By war’s end in 1945, however, the future political, economic and social prospects of South Asia, with India at the hub, were strong. This 553 page study lays out just how India, Britain, the United States and their allies dealt with the threat of the Axis powers (Germany, Italy, and Japan), and how Indian troops, in particular, played an outstanding role on the front lines of the war.

In Chapter 1: Politics of War, we read how poorly prepared India and the British colonial system was to meet the challenges ahead. By Chapter 18, Post-War (over 400 pages later), we realize how important India’s participation was in winning the war and in setting that nation on a firm footing for the independence it finally achieved in 1947.

In this well-researched historical study Srinath Raghavan lays out the main story of India’s critically important involvement in the war. It is not, however, a detailed accounting of military strategies and battlefield engagements. Rather, Raghavan focuses largely on colonial politics, economy, and society within the war context. Early on, he writes that “The really interesting story is the transformation of the Indian army, step by painful step, from a backward constabulary outfit into an effective and adaptable fighting force.” From there, he takes the reader on a well-documented and fascinating tour de force of “such seemingly mundane matters as training and logistics, health and morale.” To that end, we have a chance here to see both behind and beyond the battlefield to what drove the transformation of the military into a highly effective and heroic fighting force and how the Indian army matured and performed so well.

India in the late 1930s was in some turmoil, with a nationalist quest for Independence from Britain a strong theme. The German Blitzkrieg of 1939 and the swift Nazi occupation of Western Europe thereafter, especially the collapse of France, struck fear in the weaker countries like India that had strong ties to Europe. Internally, the British government’s antipathy towards India’s Congress Party leaders (among whom most readers will recognize Jawaharlal Nehru and Mohandas K. ‘Mahatma’ Gandhi) was a serious problem. India’s politicians were fearful of what the war might mean for them, though as Nehru is quoted saying in 1940, with some confidence and prescience, “Hitler may win this war, but Hitler will not dominate the world. He will fall as Napoleon fell.” Meanwhile, the Congress Party leaders were deeply concerned about the “singular obtuseness” that the British government demonstrated toward colonial politics and Indian national aspirations despite the disastrous “hammer blows of war” that beset them.

The author gives us a well-documented, careful, and at times nearly spell-binding portrayal of how India achieved strong war-footing and participated with honor and remarkable fortitude with the Allies on several fronts: Africa, Iraq, Iran, Europe, Southeast Asia, and especially Burma.

Who fought for India and how well they performed alongside Britain and her allies, especially the Americans, is a recurring theme throughout the book. The Indian Army was largely populated with what the Brits called “the martial races,” like the Sikhs and the Nepalese Gurkhas. The reader will also be surprised at the tenacity of an anti-Raj movement and the threatening role of the Indian National Army raised by Subhas Bose, which fought alongside the Japanese, and ultimately lost, against the Allies in Malaya and Singapore.

This book will especially attract World War II history buffs and others interested in the history and culture of India in the broader context of South and Southeast Asia in a time of both crisis and national growth.