Maxi’s Secrets: (or what you can learn from a dog) by Lynn Plourde 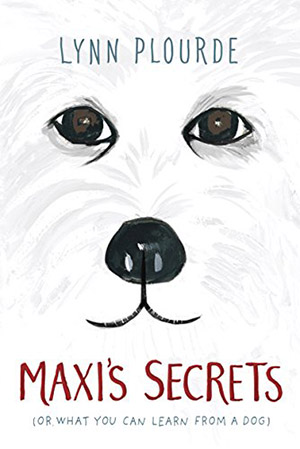 Maxi’s Secrets: (Or, What You Can Learn from a Dog), is a splendid middle-grade social coming-of-age book with important messages for all, young and old. At one level, it is all about a boy named Timminy and his big, lovable dog, Maxi, growing up amongst other youngsters with physical challenges. At another level it’s all about dealing with social and physical differences that we may face throughout life.

Timminy is the narrator. Maxi, his constant companion, is a big white Great Pyrenees dog. Together, boy and dog have a lot to say about growing up and making friends in a world full of human variety.

Diversity abounds, especially at school. Among Timminy’s classmates are two unique girls: Abby, who is blind, black, and an adoptee in the white family that lives next door, and Devon, who suffers from a form of hereditary paraplegia requiring crutches to get around. There are also two nerdish boys who shy away from the usual social palaver with other children, and several bullies who tend to make fun of those who look or act differently from themselves. Even Timminy has issues: his uncommon name, his unusual shortness, the fact that he’s the son of the school’s assistant principal, and the fact that’s a bit of a loudmouth.

Maxi is stone deaf. Nonetheless, Maxi is a major factor in tempering the experiences that Timminy faces daily. What Timminy copes with at school and learns from his dog at home relate directly to becoming an understanding, responsible, perceptive, and thoughtful human being in a diverse and often insensitive world. Timminy is the new kid in school and as he meets his classmates he quickly learns how to befriend them, especially those who are unlike him. During Maxi’s short life, Timminy learns a great deal about coping with many unexpected but not unusual social encounters, and how to raise a dog.

At the end of each of the 51 short chapters, Timminy sums up the lessons learned. He calls them Maxi’s secrets; one-liners beginning with “You can learn a lot from a dog you love,” and concluding with “Best friends are forever friends…” in the fullest sense. Others include “The bad stuff, like the good stuff, needs to be shared,” “There’s no guarantee your best is good enough,” and ‒ I like this one! ‒ “To get through life, sometimes you have to hold on tight.”

Maxi’s Secrets is a remarkable book about holding on tight while addressing, coping with, surviving, and moving past the unexpected. It is recommended for middle-grade children age 10 and up, although it’s a good read at any age.