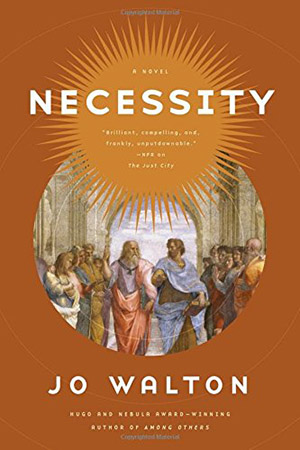 Necessity, written by award-winning author Jo Walton, is the third book in the Thessaly series. The five cities, which spawned from the original Just City founded by Athena, are thriving in full on the planet Plato where Zeus relocated them. There is an established class system, the citizens have befriended nearby alien races, and all seems right with their distant, well-balanced planet. Until suddenly Pytheas, the human incarnation of Apollo, passes away and returns to his godly form on the same day that a spaceship from Earth is spotted near Plato. How will these two events affect the growing cities and their Platonic ideals, and why has Athena disappeared?

It is worth mentioning that the reviewer has not read – nor had any prior knowledge before partaking in Necessity – of the previous two books in the Thessaly series, The Just City and The Philosopher Kings. While this reviewer was able to follow the narrative and find moments of either enjoyment or dislike in the text, it is only fair to note that this review is solely based on only this book in the series. Readers who have partaken in the whole trilogy might not agree with this review, and that is completely just.

As a whole, Necessity is well written and acts as a fascinating concept. The idea of mixing Greek mythology with space travel is such a unique twist of genres and plot elements. It’s fun to have Greek gods pop in and out of the story while characters are discussing subjects such as spaceships and aliens. Each chapter allows the reader a different point of view from four characters: Apollo, Jason, Crocus, and Marsilia.

While a fascinating concept, Walton does not spend enough time establishing the planet or the different species (human, god, alien, etc.) that inhabit Plato. Perhaps this is because she had already done so in the prior novels, but it would have been nice to have more of the lifestyle of Plato highlighted in this particular text. What’s more, the plot gets a bit convoluted the more readers delve. Necessity consists of a lot of characters just sitting around chatting about philosophy, and at a certain point in the story Athena goes missing and those looking for her do an almost treasure hunt-like quest to find her which is, unfortunately, painstakingly dull. For a book with a premise that’s basically Greek gods in space, Walton really doesn’t take advantage of the extravagance of the genre she’s working in.

Nonetheless, Necessity is well-crafted and intriguing, and perhaps worth the read for those interested in a science/historical fiction mash up and anyone obsessed with Greek mythology. Although, if truly interested, this reviewer recommends readers pick up The Just City to experience first – they will surely benefit from starting at the get-go instead of the tail end.