No More Illusions by Daniel Babka 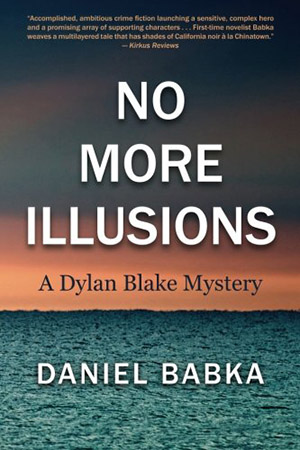 Detective Dylan Blake is having a marvelous hiking and camping vacation when his boss, Chief Cooper, interrupts his time off to ask him to take a look at a car accident in the area. What Dylan finds there raises suspicions of murder. His suspicions are confirmed when someone tries to flatten him with a rock at the crime scene. Determined to solve the crime, Dylan starts investigating the prime suspect, Kathryn Winslow – the dead man’s former partner and lover. The more he digs, however, the more he finds that the truth is far more convoluted – and dangerous – than he’d thought possible. With the killer’s sights turned on him and his family, Dylan must work to bring the killer to justice before it’s too late.

No More Illusions, by Daniel Babka, is the first book in the Dylan Blake series and it’s an excellent debut. Dylan Blake is not the normal detective. He hikes, reads poetry, takes care of himself, and needs practice with firing guns. He also makes mistakes and has a surprising and refreshing lack of paranoia about him for a police detective. Dylan works through cases methodically and thoroughly, but has a nuance and subtlety to his investigation oftentimes missing from mystery novels. The supporting characters are mostly well flushed out and add to the story and backstory of Dylan’s life well. The one exception is Dylan’s girlfriend Julianna. She feels less real than the other characters and is generally forgettable for the reader. The story itself unwinds itself slowly and thoughtfully but doesn’t drag. The reader gets the clues as Dylan does and goes with him on his investigation. There are no nonsensical twists or turns in the book; the secrets revealed feel genuine and true to the characters. Overall this is a highly satisfying book to read and a novel that mystery fans will definitely enjoy.