Panacea: A Novel (The ICE Sequence) by F. Paul Wilson 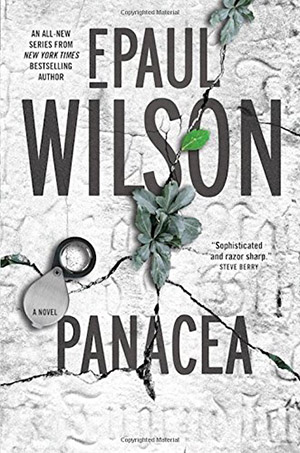 In F. Paul Wilson’s novel, Panacea, medical examiner Laura Fanning finds herself in a conflict of lifesaving potential when she examines two charred bodies with no known cause of death. They also share a mysterious tattoo. Unbeknownst to her, a struggle has broken out between two factions. One group, known as the Brotherhood or 536, believes that God wants people to suffer and struggle. The other group of people, known as panaceans, grow, protect, and disperse the panacea at their will. Laura is approached by an older, ailing, wealthy gentleman who wants her help in finding this potion for himself. He makes her an offer that she can’t refuse even though she is a non-believer of panacea. He sends her off with money and protection in the form of an ex-SEAL by the name of Rick Hayden. Together, they find themselves in a race against time as their benefactor weakens. They are following a trail that takes them from continent to continent. Laura quickly succumbs to the idea of hope in this panacea as she learns her daughter is gravely ill back home. Does this panacea really exist or are the Brotherhood’s people crazies who just want Laura dead.

Panacea is a modern day thriller that will also draw in science fiction readers. It is a rapid, page turning story will have readers captivated in fascination and wonder from the start. The dialogue flows naturally and fast when Laura’s personal reasons to find the cure appear. Pure sci-fi entertainment with comet induced climate changes, following the North Star, and stories about the All-Mother come into the story. Sci-fi readers will not be disappointed with F Paul Wilson’s latest novel, but even those with other genre preferences (particularly mystery) will likely enjoy it as well! Truly one great read!