Quarry in the Black by Max Allan Collins 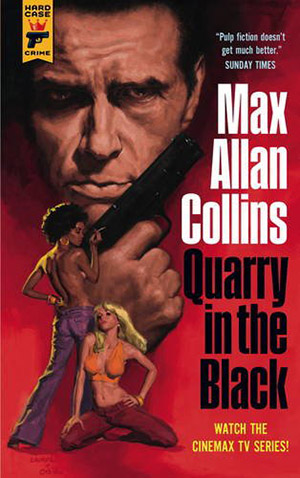 Max Allan Collins’ Quarry in the Black is the latest installment in a pulp series started back in the mid-1970s and now on its 13th title.

When the book opens we follow Quarry, a retired Vietnam veteran who is a professional mercenary, as he is hired by “the Booker” to assassinate an MLK like Civil Rights advocate by the name of Reverend Raymond Wesley Lloyd. The Minister is said to have it coming by the Booker and with a high price for his head, Quarry can’t turn down the deal. The narrative quickly moves to Ferguson Missouri, with Quarry into an apartment across the street from Reverend Lloyd’s headquarters, and our course is set. What follows is a straight forward pulp novel. Collins is a mostly deft stylist and the book reads as if he took it out of a safety deposit box where he’d kept it since 1972, the year the book takes place, though he claims in his afterward to have recently penned the title.

Reverend Lloyd’s political group, who is campaigning for George McGovern, is infiltrated by Quarry who poses as a peace loving Vet who is against the war. The fun of this book is how Collins tangles up his characters, especially those in Lloyd’s camp.

Quarry’s narration is tough-guy-esque but something about the tone doesn’t quite hit the mark and isn’t quite believable. The sex scenes are steamy, some of the better genre writing here by being just what you’d want from 70s pulp, and the plot is compelling enough to make this a breezy, enjoyable read.

You don’t read Collins on a sentence by sentences level. Some of the one liners are forced, the writing is repetitive, and at times borders on schlock. What you read Collins for is a feel, and the book has feel. The tone is authentic pulp through and through.

There is something to be said about reading this book during the current election cycle. With the issues around Black Lives Matter, especially in Ferguson, the book stands as a nice counterpoint to our own troubled times. Quarry in the Black is another fun title from the always reliable Hard Case Crime imprint, one grounded in the same grime of its origins.